An Interview With Rapper-Singer Blxst: LAs’ Most Unique Flow Keeps A Tight Circle, Plays The Role Of Superhero And Makes Great Tacos 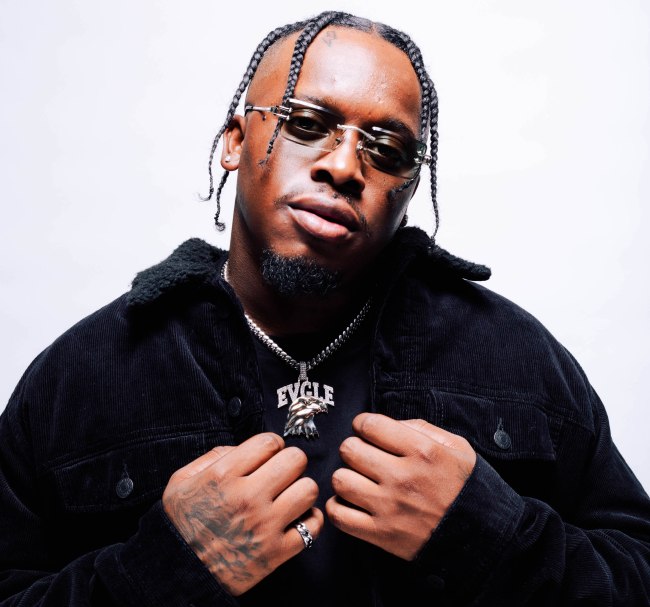 When Matthew Burdette was growing up in South Central Los Angeles, he never imagined he’d have a stylist. Now, five years after beginning his solo music career, the artist better known as Blxst (pronounced blast) is rocking Valentino pants at photoshoots from mansions in the Hills and has posted more than 50 million total career streams. After teaming up with Red Bull Records, he debuted his highly-anticipated EP ‘No Love Lost’ a few months back and continues his quick rise to prominence in both the R&B and rap worlds.

There isn’t a traditional route for entering the music industry, but for Blxst it happened very fast, and all on his own. He began rapping, singing and producing shortly after he finished high school, and prides himself on mixing and mastering his own sound, self-editing his own music videos and creating his own artwork. Along the way, he has produced songs for everyone from Kendrick Lamar, to YG, to Eric Bellinger. From a solo standpoint, he released his first single ‘Who Would’ve Thought’ in 2016, and really took off with his song ‘Hurt’ in 2019.

Blxst dropped his music video for his single ‘Got It All’ with Dom Kennedy on Thursday. When I say that it has skyrocketed to the top of my most played tracks, I mean it. It’s so different than most of what’s out there and Dom adds the perfect compliment.

I was given the chance to speak with Blxst and ask him a series of questions about the past, present and future. We talked about the ‘x’ in his name, fatherhood, puberty, handling negativity, and how tight he keeps his circle. He’s worked very hard to get to where he is and is only going to continue to grow as a person and in fame.

Here is our conversation in three parts, not including the heavy hitters:

How Burdette made the transition to Blxst.

Grayson – I didn’t grow up on music, if you will, and led me to I fall in love with music later in life. When was the first moment that you really felt something through music?

Blxst – Music was always around me. My mom and my sister always had a record player on and would play different things like Erykah Badu and Jill Scott. It was always in my DNA, but I didn’t really find a passion for music until right after high school.

Grayson – Surely you had to have been told before that point that you have a good voice, no? Did you sing in church, or at home, or around your friends? Did anyone ever say ‘hey, Matthew, you’re a great singer’ and suggest that you try your crack at the music industry?

Blxst – As a youngin’, I wasn’t confident in my own voice. People would tell me that I can sing and stuff, but I didn’t develop that confidence until later on. Actually, I feel like that came with puberty. My voice got deeper and it became more full to where I can find my own sound.

Grayson – I know the name started with an ‘a’ instead of an ‘x.’ Why did you go with Blxst with an x?

Blxst – Originally, I just made it up when I was younger. Just being a part of a clique and stuff. I didn’t really have a meaning behind it at first. But ever since I had my son, I look at it as being a superhero for him. So I found my own uniqueness in it. The reason I changed it from an ‘a’ to an ‘x’ is pretty simple, it’s so when you look it up I can be the first thing to pop up.

Grayson – Am I correct in saying that you started on the production side of things before you moved into the solo music career side of things?

Blxst – I would say that they came simultaneously, but I started getting my notoriety with producing first, yeah.

Grayson – Music is not just an easy thing to pick up. Especially to rise this quickly. How did you get into the studio, build connections, and work your way up?

Blxst – I’ve probably paid for two studio sessions in my entire life. It started with me having a laptop in my own room and maximizing off what I did have. Even to this day, I record everything at my house. It’s cost efficient and a better vibe for me. I don’t really like big studios so I keep it that way. I work really hard and trust myself.

Grayson – Was there ever a moment that you realized you were doing something right? That it was possible you could really hit it big?

Blxst – I produced a local song called ‘Do Yo Gudda’ with Kendrick Lamar and YG. That pretty much gave me my confidence that it was possible. To go from zero to that was just a great transition.

Blxst – Getting on a billboard was also a cool thing.

Grayson – On the flip side, what has been the biggest challenge you’ve faced along the way?

Blxst – Actually, up until this point it’s becoming a good father. My biggest fear is failing my son. I also feel like that fear is what keeps me hungry and striving for perfection. It’s still a challenge and I’m still learning. That transition of having a child really forces you to find out who you are as an individual.

Grayson – I have to wonder. It wasn’t until high school that you got into music, but you surely had to have been told before that point that you have a good voice, no? Did you sing in church, or at home, or around your friends? Did anyone ever say ‘hey, Matthew, you’re a great singer’ and suggest that you try your crack at the music industry?

Blxst – As a youngin’, I wasn’t confident in my own voice. People would tell me that I can sing and stuff, but I didn’t develop that confidence until later on and I feel like that came with puberty. My voice got deeper and it became more full to where I can find my own sound.

Grayson – I’m sure that there have been multiple opportunities to sign over the last two years. Why did Red Bull Records stand out over other labels?

Blxst – They understood the ground-up mentality that I have. I already have confidence in myself, being that I’m so hands on, so I didn’t want to just jump into a major situation where I wasn’t the focus. It was kinda like being in the starting lineup as soon as you join the team. I love the infrastructure there and my team works with their team like we’ve been working together forever.

Grayson – What’s next for Blxst?

Blxst – I want to make a joint tape with Bino Rideaux, a part two of the ‘Sixtape.’ And then I want to put out a full body of work, my debut album.

Grayson – Beyond the production side of things, what you do is impressive. You do it all. I could be mistaken, but I don’t think there are many artists out there that take a song from square one and see it all the way through publishing. It’s all a one man show for you. Has it always been that way?

Blxst – When I was getting started, there was no choice. I didn’t have the money to outsource anything, so I had to teach myself. Along that process, I fell in love with making beats, mixing the vocals, making the cover art, editing the videos— to the point where it didn’t even feel like work. Up until this point, I’ve looked at it like I’m protecting my vision, because I know what level of standard I set for myself.

Grayson – What’s your favorite part of the process?

Blxst – I would say that mixing the vocals is the cherry on top for me. The idea of creating something from absolutely nothing, manifesting the idea, to it becoming physical is dope to me. I feel like you come to a realization while mixing the vocals that this was just an idea at one point and now I’m actually tailoring it up. You know, it all comes together.

Grayson – You’ve said before that Kanye West and Pharrell are two of your biggest musical influences. But you sound so different from those guys. Where did your sound come from?

Blxst – My sound is more so West Coast influenced as far as tempo and rhythm and just the bounce that I have in my music. I would say the Nate Doggs and similar sounds like that, but I add a melodic wave to it that’s different and uniquely me.

Grayson – When you’re working with other people, you have the creative minds to feed off of and flow back-and-forth. When you’re at home, working on your own song how do you receive feedback?

Blxst – I ride around solo in the car and make sure it feels right. And then whenever I’m chilling with the homies, I might play it for them. Or I’ll send it to a couple of the homies who are always critiquing my music. Mainly, I just go with my gut. If I like it then I feel like the world may like it.

Blxst – I stay around people who I trust. Also, I have a lot of communication with my mom. I just stay to myself really and I go with my gut feeling. If I feel like I shouldn’t be a certain place, I don’t go there. It’s been working so far, so that’s what I’ll keep doing.

Grayson – How tight do you keep your tightest circle?

Grayson – Do you read your DMs, replies, mentions, etc.?

Blxst – I try to read as much as I can without looking at it in a negative way. It gives me fuel, and at the same time, I like seeing people’s reaction. I see negative stuff too and that fuels my energy. But yeah, I’m tapped in for sure.

Grayson – When the world returns to normal, what is something fun that you’re looking forward to? How are you passing the time these days?

Blxst – I like bowling a lot. That’s probably one of the more random things about me. But other than that, I’m big on Call of Duty and 2K right now.

Grayson – What’s your go-to team on 2K? Is it all Los Angeles for you?

Grayson – Like you said, from 0 to 100 real quick. What was your first big purchase?

Grayson – You’re really going to make me ask? What car?

Blxst – I’m embarrassed to say, but a Mercedes.

Grayson – I saw that you’re a big chef these days. When did you first get in the kitchen and what’s your go-to dish?

Blxst – You can never fail with my vegan tacos.

Grayson – Is a hot dog a sandwich?

Grayson – If Blxst had a slogan, what would it be?