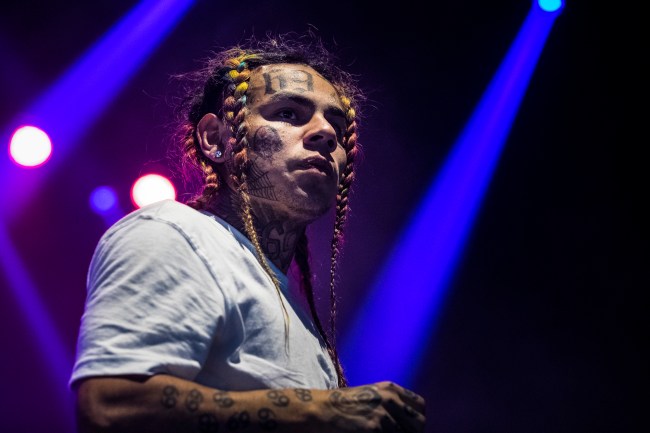 Rapper Tekashi 6ix9ine, real name Daniel Hernandez, has been arrested by ATF agents and was arraigned yesterday in the Southern District of NY on weapons and racketeering charges. He’s now facing the potential of life in prison.

6ix9ine is already on probation, and a TMZ report notes that spending time in jail is a virtual certainty for Tekashi69 who’s song ‘FEFE’ with Nicki Minaj is currently #42 on the Billboard Hot 100. He also has ‘Stoopid’ in the #88 spot on that list with Bobby Shmurda.

Tekashi 6ix9ine has been on probation since 2015 for Sexual Misconduct and using a child ‘in a sexual performance‘. He never spent time in jail or prison for that crime but given that he’s already on probation and now facing similar charges to notorious crime bosses, it sounds like he’ll be locked up for quite some time.

NEW YORK (AP) — Rapper Tekashi 6ix9ine was deemed a likely danger to the community and denied bail Monday after a prosecutor said there was evidence that he directed or participated in multiple acts of violence as part of a deadly gang.

U.S. Magistrate Judge Henry B. Pitman concluded an hourlong hearing by citing “troubling” corroborating evidence offered by a prosecutor to show that 6ix9ine directed or participated in multiple acts of violence over the last eight months.

Assistant U.S. Attorney Michael Longyear said a backpack stolen during a gunpoint robbery in April was found during a raid at 6ix9ine’s Brooklyn residence, along with an automatic pistol.

“The defendant is quite violent,” the prosecutor said of a man whose debut album, Day 69, was among the most downloaded records on iTunes. (via)

What we know so far…

▪️6ix9ine is facing six counts, including shooting of a gun during a crime
▪️Also charged with conspiracy to commit robbery and shootings
▪️Reportedly surrendered passport and bank account balance ($1.5 million)

Prosecutors say they have video evidence of Tekashi 6ix9ine involved in a violent robbery in Times Square. They also say they have footage of him bragging about gunshots being fired recently at the Barclay’s Center in Brooklyn.

His charges carry a mandatory minimum sentence of 32 years with the potential for life in prison, and it appears as if prosecutors are confident that they can reach a conviction.

Tekashi’s new album, Dummy Boy, is set to be released on Friday, November 23rd. He shared an image of the track listing on Instagram just hours before being cuffed and locked up with prosecutors considering him a flight risk.