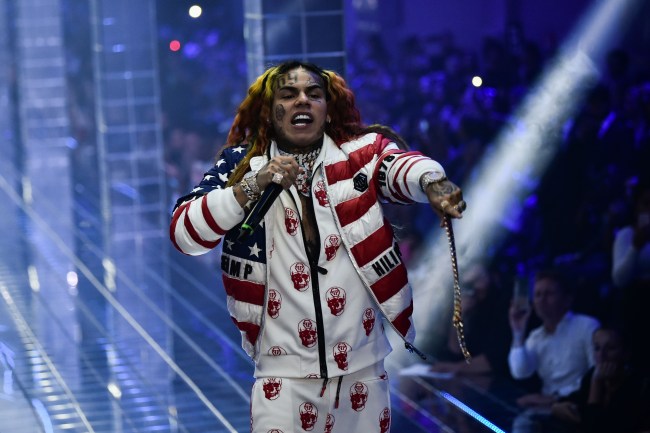 Rapper Tekashi 6ix9ine was released from prison early and the plan is to start working on new music very soon. Real-name Daniel Hernandez, Tekashi was released from the Queens Detention Facility this week due to the virus outbreak and he’ll now complete his full prison sentence at home.

Tekashi 6ix9ine was busted in a 2018 federal racketeering case where he eventually ‘pled guilty to nine charges including conspiracy to murder and armed robbery’ but he cooperated with the government in the case and led to multiple guilty please and convictions which resulted in his lighter sentence.

The 23-year-old rapper has asthma which makes him particularly vulnerable to the disease caused by the virus and the concern of the prison system being overwhelmed has led to the early release.

U.S. District Court Judge Paul Engelmayer for the Southern District of New York had this to say about Tekashi’s release:

The COVID-19 pandemic is extraordinary and unprecedented in modern times in this nation. It presents a clear and present danger to free society for reasons that need no elaboration. COVID-19 presents a heightened risk for incarcerated defendants like Mr. Hernandez with respiratory ailments such as asthma.

Further, the crowded nature of municipal jails such as the facility in which Mr. Hernandez is housed present an outsize risk that the COVID-19 contagion, once it gains entry, will spread. And, realistically, a high-risk inmate who contracts the virus while in prison will face challenges in caring for himself.”

Now that he’s home, it’s being reported he’s allowed to immediately begin working on new music but that comes with logistical hurdles of its own according to Complex.

The rapper’s attorney, Dawn Florio, was asked if he could begin making new tracks and her response was “Yes, he can release music.” As for what those new songs might look like, he still has obligations to 10K Projects due to a previous advance:

“What he’s gonna do is, he already has that advance for 10K Projects,” Florio explained. “So he has to put out a Spanish album and an English album. So that’s what he’s going to be working on.”

Just prior to speaking with Complex, coincidentally, Florio said she was speaking with 6ix9ine’s entertainment attorney Bob Celestin, planning the rapper’s return.

“We were actually trying to figure out the logistics of how that’s going to work,” she revealed. “It’s more difficult because of the coronavirus, because you don’t want strange people coming in to set up a studio where he’s going to be.”

But they don’t want to wait too long to build that studio. Florio told Complex that her conversation with Celestin made clear that new 6ix9ine music has to come soon.

“He already got an advance for all those millions of dollars,” she recalled the entertainment lawyer explaining to her. “So he’s gotta put out those two albums as soon as possible. I can confirm that from Bob.” (via Complex)

This has certainly been one of the strangest sagas in modern rap. He saw a meteoric rise to stardom and appeared to blow up within a matter of months only to see everything come crashing down when the feds arrested him for the ‘conspiracy to commit murder’ plot.

Over the past year, he’s mostly been a meme about snitching on people. I think a lot of people are right to wonder what his public persona will be like after going through all of this and if his time spent behind bars will define him in the music ahead. Presumably, this team’s been working on music to go with whatever he’s been writing during his time behind bars but we’ll know more about this in the coming days.