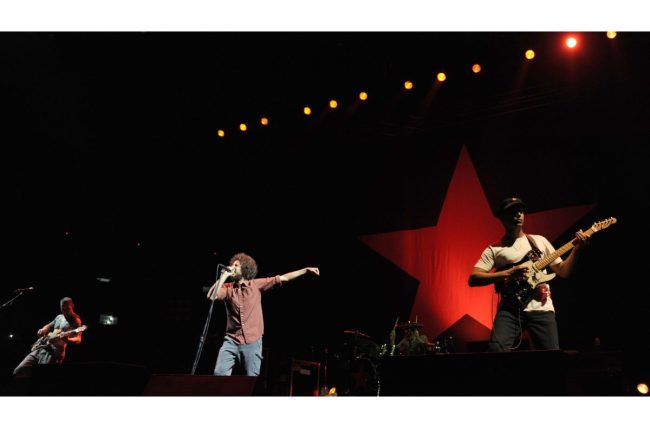 Rock and roll fans were presented with the explosive return of Rage Against the Machine. More than 20 years removed from their last album release, RATM played a sold-out concert in Wisconsin as they kicked off their reunion tour. It was the band’s first live performance in over a decade.

RATM, known for their intense energy and politically charged lyrics, performed at the Alpine Valley Music Theater in front of 37,000 people. While they didn’t bring any new songs to the set list, it didn’t stop viewers from absolutely losing their minds.

Hits like “Killing in the Name,” “Guerilla Radio,” and “Bombtrack” were all part of the show, which kicked off a tour that’s already selling out across the country. The reunion was initially announced back in 2019 but was postponed on multiple occasions due to the pandemic.

Now, though, the music is back. Fans were quick to react to the return on social media.

Fans in attendance were quick to post their reactions to RATM concert on Twitter. Check out the response to the opening show.

Yesterday, Rage Against the Machine played its first show in 11 years! They still have it! "Freedom? Yeah, right!" pic.twitter.com/UsJFsBRb5n

i took this video #ratm #wakeup

it was a good show pic.twitter.com/5QyIetLxUH

Their first show in 11 years and still bringing the energy. God this show’s gonna be sickkkk #RATM pic.twitter.com/vilmZvdZOl

As is the case with most Rage performances, a political tone was evident.

This show looked unbelievable. It begins a North American tour that will continue on to Chicago next week. The band will stay in the Midwest and northern US, while making a few stops in Canada. They’ll then head overseas to the UK and Europe in the Fall.

If the ensuing shows are anything like the opener, fans should be in for a treat.