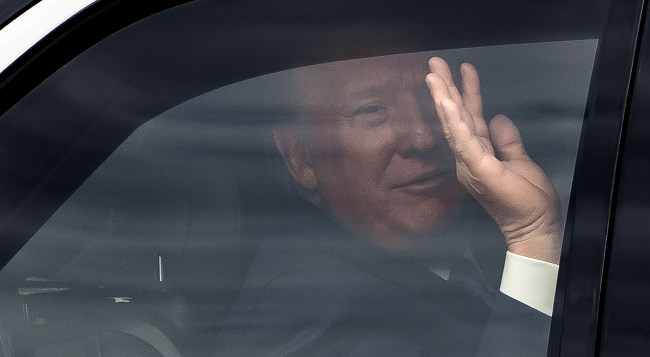 President Donald Trump made a surprise appearance at McLean Bible Church in Vienna, Virginia, but that wasn’t the only surprise he pulled off that day.

Trump also surprised everyone who saw him when he showed up with slicked back hair, wearing gigantic khaki pants and golf shoes.

On his way back from golf, Trump stops at McLean Bible Church to "pay respects" to victims of the Virginia Beach shooting. In respectful golf clothes, with respectful hat hair and again with the way too long respectful pants. Respect. pic.twitter.com/r2syOrfsoJ

The President was in town to pay his respects to the victims of the recent Virginia Beach mass shooting (which actually happened about 200 miles southeast of Vienna). All of which combined to create a plethora of questions (and jokes) from the internet.

Was Trump trying out a new look before taking off on his trip to the United Kingdom? Nope.

Yesterday people were like, hey, keep your hair that way it looks somewhat normal, but, nope, Trump went right back to his weird bird nest thing. pic.twitter.com/hhLjmpoXYs

Was it just the result of the President have a bad case of hat hair after getting in a few holes? (He held a golf hat in his hands while at the service.) Maybe.

Trump takes off his cap and reveals his non comb over hair for the first time. And of course it actually looks better. pic.twitter.com/HyL9h2DarH

And what… was up… with the giant pants? Did he buy them at the same store where Tom Brady gets his gigantic coats?

Not only does trump have tiny hands but it looks like he has very short legs ! He’s a ‘billionaire president ‘ and he can’t afford pants that fit him ?! 🤣🤣🤪🇺🇸 pic.twitter.com/JnrGueKz5o

So many questions. So many comments. So many jokes.

When Trump does his hair like a normal person he looks like someone who exists in the Road House Universe pic.twitter.com/26ghyEkVW1

If only Patrick was still around to take care of things 😞 pic.twitter.com/Nzwg6L1RMC

natural hair Trump looks like old Biff from Back to the Future 2 and that ruined my whole week and it's only Sunday pic.twitter.com/IsSiWkRV4c

Too vain to admit that as an old man he's shrunk a couple or three inches, Trump buys his pants at the old length, hikes them halfway to his nipples and they still hang down completely over his shoes. pic.twitter.com/QmjCQ0T7Vm

which steven seagal movie is this from

im voting for this guy

He looks like he owns a chain of Red Lobsters

Trump showing up at a church 210 miles from the site of a mass shooting and then standing around for 15 minutes in his golf shoes while the pastor prays for him and then dipping out is legitimately one of the most presidential things he's done. Credit where it's due.

Meanwhile, over in the U.K. near Stansted Airport where Air Force One landed…

Give us a wave when you fly over tomorrow !! @realDonaldTrump #climatechange #ClimateChangeIsReal pic.twitter.com/IzsT2XVpAn