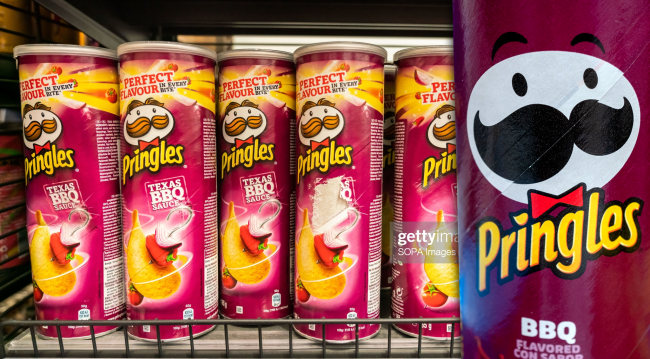 Pringles potato chips have been around since 1968 when Procter & Gamble released them with the tagline “Pringle’s Newfangled Potato Chips.”

Currently owned by Kellogg’s, Pringles are now sold in more than 140 countries.

And as we have seen with other Kellogg’s food items like Froot Loops, the company isn’t afraid to make bold changes to iconic logos – even it does make people on the internet very pressed.

Which is exactly what is happening right now with Kellogg’s changing the Pringles logo for the first time in 20 years.

Fans of the popular stackable snack know that Mr. P (AKA Julius Pringles) has long graced the cylindrical chip container and have become comfortable with his classic look over the years.

Now, however, Mr. P has had himself a glow up that takes his classic look and updates it to look more modern, and some would say, like an emoji.

This radical change in the Pringles logo was first introduced back in December, but hadn’t made its way to the UK until now.

“After being Pringles’ loyal mascot for many years, Mr. P has had a well-deserved makeover, in what is his boldest look yet,” said Florence Kayll of Pringles UK.

“Mr P’s hair may now be gone but he’s looking more youthful than ever with striking new eyebrows and is of course still sporting his famous, stylish mustache as he celebrates his 30th birthday in the UK and Ireland.

“While Mr. P and the can design have both undergone a transformation, Brits can be confident that there are no changes to the amazing flavor and crunch found inside every Pringles can.”

Mr. P just got a fabulous new makeover 😍 but we're still as Pringles as ever! pic.twitter.com/sPr34x95GV

Reactions to the change, of course, were not very positive because, well, internet.

The new @Pringles logo literally looks like a copy version you’d expect to see at Aldi.

The new Pringles logo should and will die a wicked death!

@Pringles What the fuck have you done to the logo?

Where is fucking shine in his eyes and that new logo pringles is just blehhh 🤢#pringles we want old this mr back and his hair too pic.twitter.com/bAZwVgHAoW

By the way this logo looks like shit, fix it, Pringles

fuck you change your logo back

No joke. They cans with the old logo are probably already up for auction on eBay.