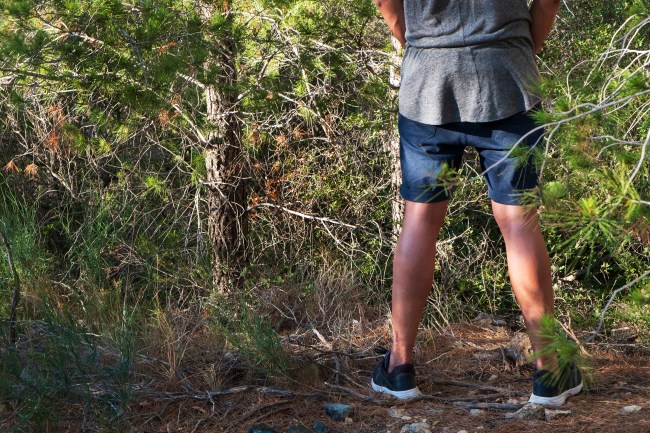 I left New York City on Friday, March 13th for the wooded peace of coastal Maine. We’ve been at this for a month and two days now, and I have peed in a toilet a grand total of zero times. Conservative estimates would put me at around 100 pees (three pees a day for 33 days) and all of them have gone towards the conservation and growth of plant life.

I read somewhere that with every toilet flush, we use 1.5 gallons of clean water. Obviously that’s a necessary evil when you’re pushing out lava rocks. And of course women need a safe space to deposit both solid and liquid detritus. But as a man, flushing away urine—urine that has barely changed the color of the toilet water because I hydrate so thoroughly—has always seemed so wasteful to me. I’ll do it, but only because peeing in a sink is frowned upon in polite society. Even though they say that piss contains the powerful cleansing agent Ammonia. So yes, I could clean your sink with my piss. But instead, I’ll flush it down the toilet because I’m a “guest” at your “dinner party.”

That’s why I like urinals so much, especially waterless urinals. They’re the great middle ground between wasting a jug-and-a-half of clean water and peeing outside like a wolf. They’re one of the few gender-specific inventions that remains acceptable in the bathroom community. But of course we don’t have a urinal here, because we’re not staying at an airport. We’re in a cute little cottage, nestled in the woods of Maine. And I have come to view the surrounding woods as one big, personal waterless urinal.

There is something deeply satisfying about urinating outdoors. It is one of the brightest joys of my day. Whereas the urgent call of a full tank used to come with feelings of anxiety and annoyance, I now find myself grinning ear to ear whenever I realize it’s time to squeeze the lemon. I skip to the door, humming a merry tune as I fish my hose out of its cage, ready to let fly the moment I’m on the range. The phrasing “to relieve oneself” makes more sense now than ever before. I am relieved by the sensation of emptying my bladder, and I am relieved that I am not wasting perfectly clean dog-drinking water.

The front porch of this little cottage is covered, and rainy day urinations are easily my favorite. I’m simply adding my stream to the great rivers of the sky, the confluence of man and nature. I can’t say that I’m acting on some primal urge to mark my territory, though maybe I’m just not in tune with that wiring. I watch the dog raise a leg on every shrub, every patch of melting snow, every stump and I can’t relate. I go until I have to go again; I don’t keep reserve stores in some hidden squirt box behind my kidney.

You can play games like helicopter pee, loop-dee-loo, and sprinkler head (though that one tends to hurt). You’re not confined to a tiny oblong bowl; you can spritz and spray, mist and dribble from your feet to as far as your efforts allow. Challenge yourself! Use a measuring stick and see if you can beat yesterday’s best, like shot-putting. You’ll be dousing fires at 10 feet before you know it.

As a resident of New York City, I’ve learned that peeing outdoors results in citations and court appearances. Here in Maine, where big government knows better than to meddle with our piddle, I’m more convinced than ever of the veracity of the state’s motto…

Maine: the way life should be.