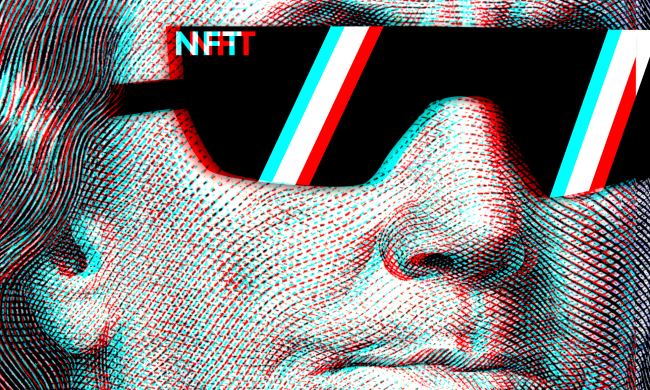 #AuctionUpdate 101 Bored Ape Yacht Club NFTs just sold for $24.4 million and 101 Bored Ape Kennel Club NFTs achieved $1.8 million in our Ape in! auction – the most significant #BAYC sale to date. Congrats to all the apes out there 🐵🐶 pic.twitter.com/e7UghlgtKy

The Bored Ape Yacht Club website says, “BAYC is a collection of 10,000 Bored Ape NFTs — unique digital collectibles living on the Ethereum blockchain. Your Bored Ape doubles as your Yacht Club membership card, and grants access to members-only benefits, the first of which is access to THE BATHROOM, a collaborative graffiti board. Future areas and perks can be unlocked by the community through roadmap activation.”

“Each Bored Ape is unique and programmatically generated from over 170 possible traits, including expression, headwear, clothing, and more. All apes are dope, but some are rarer than others,” they explain. “The apes are stored as ERC-721 tokens on the Ethereum blockchain and hosted on IPFS.”

I guess it’s better than paying $300,000 for some free clipart rocks, but, why on Earth would someone pay so much for a digital image of an ape?

According to Business Insider, it’s a combination of several factors.

Related: At Age 21, ‘Disaster Girl’ Finally Cashes In On Viral Fame, Selling Her Meme As A NFT

What an historic moment for the club: the @Sothebys auction of 101 Bored Apes has closed at over $24m. Congratulations and THANK YOU to the whole ape community. To the buyer, I think we speak for everybody when we say: WELCOME TO THE CLUB. ☠️🦍⛵️ pic.twitter.com/NKxHekC0ny

One possible reason is because faith in the U.S. dollar is very low these days. Another possibility for NFTs being sold for ridiculous prices is that it could simply be another way for people to invest, by becoming digital art collectors.

There are more than a few problems with that reasoning though.

When you buy an NFT in most cases you’re not buying content, but rather a token that connects your name with the creator’s art on the blockchain.

However, the digital tokens operate on the same deflationary principles as bitcoin. NFTs cannot be duplicated, can be easily authenticated, and are immutable, but there’s no surefire way to know whether they will maintain their value over time.

Mark Cuban, one of the people who is on the forefront of NFT investing, says NFTs are all about scarcity.

“The buyer knows how many will be made and has blockchain proof of ownership,” said Cuban.

That doesn’t really explain, however, why someone would want to spend hundreds of thousands, if not millions of dollars on a GIF or a meme, which literally everyone can “own,” or a tweet like the one that Twitter founder Jack Dorsey sold for $2.9 million and is freely available to anyone with an internet connection below.

As investing site Fool.com pointed out in May, “even traditional art and collectibles are hard to value and difficult to invest in if you don’t understand the market.”

Count me among the group of people who still don’t quite yet understand the market for NFTs.