At Age 21, ‘Disaster Girl’ Finally Cashes In On Viral Fame, Selling Her Meme As A NFT 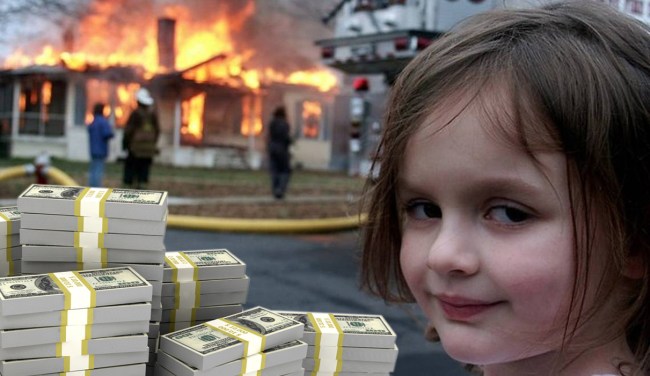 Way back in January of 2005, a young girl became internet famous as “Disaster Girl when a photo taken by her dad of her grinning at the site of a house on fire took over the internet as a meme.

That girl’s name is Zoe Roth and she is now 21 years old, a senior at the University of North Carolina, and much, much richer thanks to the newfangled financial marketplace for non-fungible tokens (NFTs).

With the Nyan Cat GIF selling for around $600,000 and the Overly Attached Girlfriend meme selling as a NFT for $400,000, Zoe and her family had a pretty good idea that they could really cash in on her viral fame for the first time in 16 years.

After seeking advice from her fellow memelords – “Overly Attached Girlfriend” Laina Morris and Kyle Craven of “Bad Luck Brian” fame – Zoe and Zoe’s dad Dave, who took the photo, decided to put her “Disaster Girl” meme on the auction block.

That question was answered by a manager, a lawyer, and the creator of the Nyan Cat GIF who sent Zoe an invite to sell her NFT on Foundation.

After a wild 24 hours of her and her father fighting the constant urge to check the bid price, the auction came to an end and Zoe found herself 180 Ether (about $430,000) richer. The money will be split among all four members of the family including her brother Tristan, who her dad also took pictures of that day.

“Like I said, her brother, Tristan, was there that day, and he could’ve been ‘Disaster Boy,’” said Dave.

On top of that, every time the meme sells in the future as a NFT she and her dad get 10 percent of the sale. They also get to keep the copyright – one of the idiosyncrasies related to the sale of NFTs.

“Being able to sell it just shows us that we do have some sort of control, some sort of agency in the whole process,” said Zoe, who is finally in control of the image that made her famous.

As for how the meme came to be, the Charlotte News & Observer reports the Roth family lived just two blocks away from a fire station so one day when the firemen were practicing putting out a controlled fire, Zoe’s dad thought it would be the perfect time to test out his new camera.

As a winner, the photo was then displayed on JPG magazine’s website where someone on the internet discovered it and used it to create a Photoshop contest.

The rest, as they say, is history.