Lindsay Lohan Drops New Single As A NFT, Explains Why They Are The Future Of Entertainment 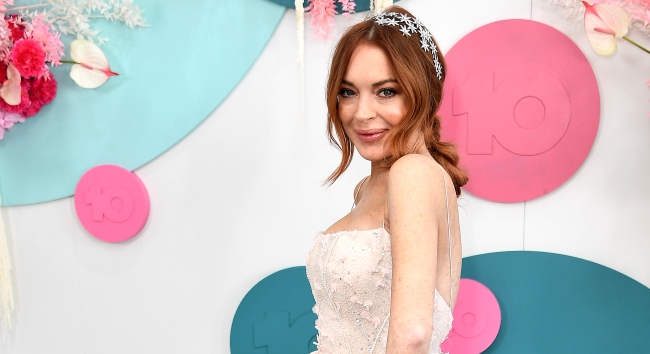 Non-fungible tokens (NFTs) are all the hotness these days, so it’s only natural that 34-year-old movie star, musician, real estate tycoon, child-trafficking vigilante, and visionary Lindsay Lohan is down to get in on the action.

Sensing a golden opportunity to promote the release of her long, looooong awaited first new music since her 2005 album A Little More Personal (Raw), Lohan announced on social media on Saturday that her new single titled “Lullaby” is going up for auction as a NFT on her fansforever.io.

“I am about to launch my next Single “Lullaby” as an #NFT in a couple hours on fansforever.io 💎 this is a genesis piece and history in the making! #firstever #women #letsgetit @justinsun,” Lohan wrote in the announcement.

Coming straight out from a dream – Lullaby is an exclusive collaboration between Lindsay Lohan and DJ Manuel Riva and is here to send you on a trip down memory lane and experience nostalgia all over again as you glance through the visuals, be prepared to get lost in it for a never before experience. Lindsay has fully invested herself in dropping this song as a NFT with a sole objective of delivering a message of empowerment, a signal out to the world to embrace the beauty that nature has blessed us all uniquely with.

“I have been recording music for a long time now. I feel a calmness when I go to the studio and it is a sort of solitude. A comfort zone. This song really means something to me because we all grow up with lullabies and I wanted to create one of my own. My voice to your ears … Lullaby”🙏 – Lindsay Lohan.

For the uninitiated, with NFT’s people pay real money to buy fake money so they can buy items (both real and imaginary) that everyone else in the world still has access to for free.

For instance, someone paid $2.9 million for Jack Dorsey of Twitter’s first tweet, which, you can view, copy, and remix to your heart’s content below. For free.

In a new interview with Forbes, published on Friday, Lohan explained why NFTs are the future of entertainment.

“It’s only a matter of time till everyone in Hollywood and beyond gets involved. Maybe we will see the tokenization of movies, and of how artists are paid for their films, music and art. I see a future where crypto, NFTs and blockchain will be the norm, rather than the exception.”

“Tokenization through NFTs can help content creators and musicians actually own the property rights for what they create, and allow them to profit accordingly. Gamers, for instance, spend hundreds of dollars on games like Fortnite: tokenization allows them to sell or trade their investment of time and money, and that’s something to be excited about in my opinion.”

“The process of receiving royalties for your work is not the most seamless and there are multiple parties involved and many moving parts. With tokenization, the process is transferred onto the blockchain in such a way that every time the art, music, movie, etc., is used or shared, the artist would automatically receive royalties. I think it’s a great way to bridge the gap between the consumer and artist.”

“When I first got involved in crypto, not many in my circle had a deep understanding of how it worked. Most of us had heard the word bitcoin, or the term blockchain, but there wasn’t much knowledge on the subject. As I began to learn more and get more involved, I quickly realized that my community could benefit from crypto and that I could inform a large segment of society that wasn’t involved in the blockchain space and introduce them to it.”

The least surprising part, however, is easy. LiLo, sensing the chance to basically get some free money, being one of the first people in Hollywood to jump on the NFT train was a development that was guaranteed to happen.