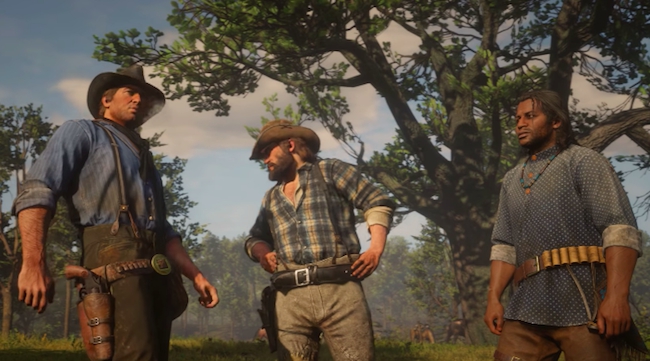 It might have come out eight years ago but Red Dead Redemption has easily stood the test of time.

In my opinion, the game— which is essentially a playable version of Deadwood— is Rockstar’s magnum opus despite the best efforts of the Grand Theft Auto series and the game-changer that was Table Tennis.

As a result, I felt emotions I haven’t felt in a long time in 2016 when the company announced they’d be releasing a sequel that was originally slated to be released in the fall of 2017.

However, this is a Rockstar game we’re talking about, so it was inevitable that the release date would get pushed back at least a couple of times.

As a result, we’ve had to rely on speculation and a steady stream of leaks in order to figure out what we could expect and didn’t really get a good look at the game until a story trailer came out a few months ago.

That trailer revealed the main character in the most recent installment is Arthur Morgan, a member of the gang headed by Dutch van der Linde (which John Marsten had defected from in the original game).

Now, Rockstar has finally blessed us with our closest look at the game to date by releasing a six-minute long gameplay trailer that caused some stirring in my loins.

It appears the environments in the new Red Dead are even more diverse than the ones in the original and the combat system (especially the hand-to-hand aspect) has gotten a significant upgrade— including some options that allow you to avoid conflict altogether.

As you’d expect, there will also be plenty of side missions and ways to unwind when you feel like taking a break from doing a wide variety of illegal things.

Pending yet another delay, Red Dead Redemption 2 is slated to be released on October 26 but you can pre-order your edition of choice right now.