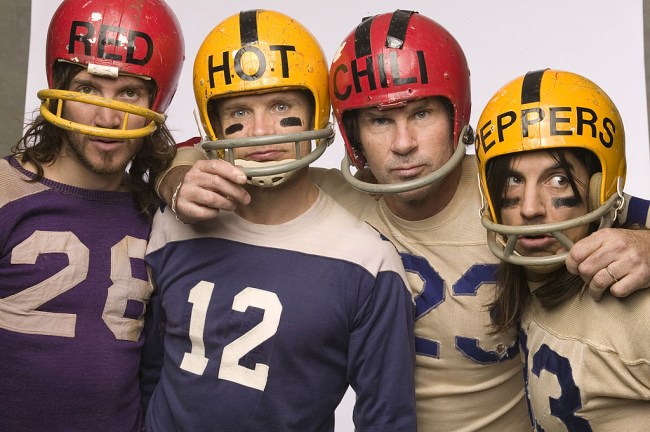 On Monday, it was announced that after a decade-long absence, guitarist John Frusciante would be rejoining Red Hot Chilli Peppers.

Frusciante played on some of the band’s biggest hits during the early 90s and the start of the 2000s. His return probably caught a lot of people off guard; not because they didn’t expect a Red Hot Chili Peppers reunion, but because most people probably didn’t know that anyone had ever left the band in the first place.

In fact, I’m not sure if most members of the general public could name the members of RHCP. At the very least, some could probably get Flea or would know that their drummer is “the guy who looks a lot like WIll Ferrell” but that’d be about as well as most people could do.

That’s not a knock against the band; it’s more a by-product of Red Hot Chilli Peppers occupying a bizarre place in the pop culture zeitgeist.

There seems to be an almost universal indifference to the band. No one really loves them, but no one really hates them either. Somehow, they’ve managed to ride that indifference all the way to heaps of record sales, accolades, and even to the Rock and Roll Hall of Fame.

And they did all of that by being the most average band ever.

There’s a spectrum when it comes to the popularity of bands. On one end of this spectrum are groups that the vast majority of people really like. Think The Beatles, Led Zeppelin, or Foo Fighters. We’ll call this “The Beatles Zone.”

At the other end of the spectrum, you’ll find the bands most of the public has agreed that they don’t care for. Your Creeds. Your Nickelbacks. Your Limp Bizkits.

We’ll call this end of the spectrum “Crap.”

Of course, there are certainly people who hate The Beatles and others who think Fred Durst is the greatest musician to ever throw on a backwards red hat and go “rollin’, rollin’, rollin’” on to a stage, but those people are outliers.

With those two extremes in mind, you can place just about any other band somewhere along this spectrum. I think it would be pretty safe to say that we could throw Red Hot Chilli Peppers directly in the center of this popularity spectrum—equidistant between “The Beatles Zone” and “Crap.”

It’s a black hole that only Red Hot Chili Peppers can exist in that bends the laws of musical success and popularity.

Red Hot Chilli Peppers’ reputation and recipe for success is kind of strange.

On one hand, Red Hot Chilli Peppers can be viewed as your archetypal rock band. They’re a band with a well-documented history of debauchery, drug abuse, and great musical ability. Yet at the same time, they are accessible to mainstream audiences and have undeniable commercial success. That kind of common ground is rare, especially among your run-of-the-mill rock fans who are notoriously prickly toward anything even remotely “mainstream“( with “mainstream” being anything they perceive to be the product of The Man, maaaaaaan!

With Red Hot Chilli Peppers, we’re talking about a band that is famous for taking to the stage wearing nothing but socks to cover their genitals. But it’s also a band that in the eyes of corporate America is “safe” enough and has a wide enough appeal to hop onstage during the Super Bowl Halftime Show to lip-sync and play unplugged guitars while Bruno Mars dances around in a blazer he stole from the set of Austin Powers in Goldmember.

However, because of their chameleon-like ability to become a band that is compatible with all musical tastes and situations, I have no clue what a Red Hot Chili Peppers fan would be like.

You can do this exercise with just about any band, except Red Hot Chilli Peppers.

For a band that has sold 80 million records and continues to perform to sell-out crowds around the world, I can’t believe that I’ve never met anyone who would consider themselves a giant Red Hot Chilli Peppers fan. They have to be out there, right?

I’ve met more people that call themselves fans of videos where people pop pimples and other skin maladies than I have ride-or-die RHCP fans.

But at the same time, I’ve never met anyone who can’t at the very least tolerate their music. I defy you to show me one person who gets annoyed when “Dani California” or “Give It Away” is played on the radio. They may not love it, but they won’t be complaining.

RHCP are the only band I’ve ever seen that falls into this space and its precisely what keeps them successful.

They’re a band that undeniably sell a lot of tickets when they hit the road. However, I would wager a guess that most people fall into the same camp when it comes to seeing them live. I probably wouldn’t go out of my way to grab tickets, but if they fell into my lap, I’d absolutely go, and the only reason would be just to say that I saw them.

Whether you’re having a party or you’re with a bunch of people on a roadtrip crammed into a Honda Civic, you’ll want some music. It’s impossible to please everyone. It just simply can’t be done. The best you can do is play something that everyone can tolerate.

And it just so happens, that’s the Red Hot Chilli Peppers formula: Music just good enough to be tolerated by most (I think I just named their next album).