Red Meat Not Bad For Your Health According To Controversial New Guidelines, Contradicting Previous Studies 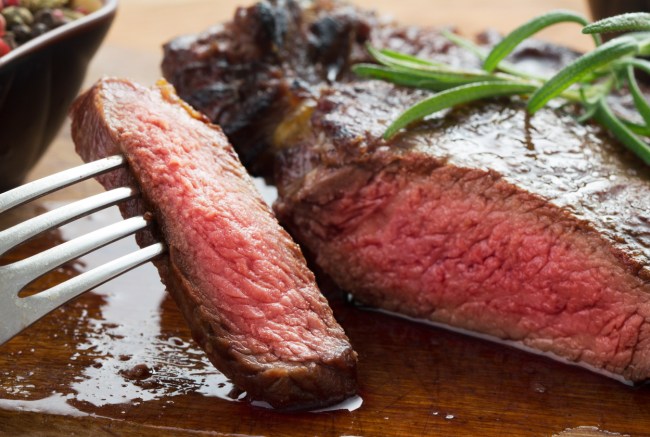 We’ve been told for the last decade or so that red meat is terrible for your health and will lead to premature death because of heart disease and/or cancer. Now a new controversial scientific study contradicts previous research over the dangers of eating red and processed meat.

The new claim that red meat is not bad for you was made by NutriRECS, which describe their organization as an “independent group with clinical, nutritional and public health content expertise, skilled in the methodology of systematic reviews and practice guidelines who are unencumbered by institutional constraints and conflicts of interest, aiming to produce trustworthy nutritional guideline recommendations based on the values, attitudes, and preferences of patients and community members.”

NutriRECS released a scientific paper about human consumption of red and processed meat in the Annals of Internal Medicine. NutriRECS’ guidelines suggest that there is no correlation between red meat consumption and cancer, heart disease, stroke, and/or diabetes.

The research by a team of international scientists examined 118 previous studies as well as existing trials and data. Their research found that “diets restricted in red meat may have little or no effect on major cardiometabolic outcomes and cancer mortality and incidence.”

“Our approach has been very different than previous approaches,” said Bradley Johnston, Ph.D., an author on the paper and a co-founder of NutriRECS. “We’ve taken the individual approach rather than societal. We believe that people should be fully informed when they make health care decisions based on best estimates of data, how certain we can be in that evidence base. What has come before us often has no assessment of certainty of evidence, or if there is, it’s often unreliable.”

“There is only low-certainty evidence of a very small reduction in cancer or other adverse health consequences,” said NutriRECS researcher Johnston. “For most people who enjoy eating meat, the uncertain health benefits of cutting down are unlikely to be worth it.”

“Is 15 fewer cases per 1,000 of cancer followed over a lifetime—is that important enough for an individual to cut off or lower their intake? We would leave that up to them,” Johnston added.

“There may be a benefit [from] reducing your intake of red or processed meat, and people should know that,” Johnston admitted, but also stated that “there may not be a benefit at all.” Johnston, who is a professor of community health and epidemiology at Dalhousie University in Halifax, Nova Scotia, hinted that the science isn’t settled, “We’re uncertain.”

RELATED: Meatless Fast Food Burgers Are Having A Moment But Are They Actually Healthier Than Beef Hamburgers?

Of the 14 NutriRECS researchers involved with the new study, only three recommended people to reduce their consumption of red and processed meats. Their assessment is based on people who eat an average of two to four servings of red and processed meat per week. So if you’re going full-blown keto and eating bacon for breakfast, bunless burgers for lunch and a steak for dinner, this doesn’t apply to you.

The NutriRECS’ new guidelines on red meat consumption created a stir among the medical and scientific community since it completely contradicted previous health advisories including ones by the U.S. government and the World Health Organization (WHO), which classified red meat as “probably carcinogenic to humans and processed meat as carcinogenic.” Researchers, nutritionists, and physicians have long advocated for a balanced diet with not too much red or processed meats to prevent chronic diseases.

Harvard researcher Dr. Frank Hu, who is an author of another study that linked red meat to higher mortality risk, called NutriRECS’ paper “irresponsible and unethical.”

The Physicians Committee for Responsible Medicine called the guidelines “a major disservice to public health,” and have filed a petition with the Federal Trade Commission to “correct false statements.” The American College of Cardiology was “alarmed by the reckless dietary recommendations” in the guidelines.

The American Heart Association, the American Cancer Society, and the U.S. Dietary Guidelines also warned that the new guidelines are incorrect or misleading.