Meatless Fast Food Burgers Are Having A Moment But Are They Actually Healthier Than Beef Hamburgers? 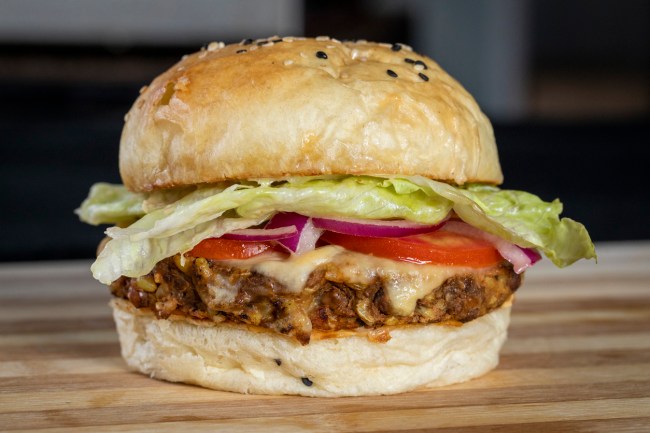 Meatless burgers are so hot right now. It seems that every popular fast food chain is now offering a vegetarian version of the typical hamburger. But are these play-based burgers actually healthier than your great American hamburger made of beef?

Brands such as Impossible Foods and Beyond Meat have created near-replicas of the beloved traditional burger. Through extensive experimentation in research labs, they have developed plant-based burgers that have the texture, flavor, smokiness of beef burgers, and they even “bleed.” The current-day plant-based burger is not the off-putting veggie burger of the past and is a scientific marvel.

Many people see that these fake burgers are plant-based so they automatically assume that the vegetarian version must be healthier. But are they really?

First off, these plant-based burgers are highly processed and that means that you are going to lose some of their important nutrients that make vegetables so good for you.

“The issue is that highly processed foods are often left with highly absorbable carbohydrates, and little of the important nutrients, such as fiber, vitamins, minerals, and phytochemicals,” dietician Sharon Palmer told Men’s Journal.

There are 21 ingredients in an Impossible Burger:

Impossible Burger has genetically modified soy, which has drawn plenty of criticisms from anti-GMO groups. Beyond Burger does not use GMOs.

RELATED: Taco Bell Is Testing Out New Dedicated Vegetarian Menu In One Market

There are 18 ingredients in a Beyond Burger:

Since there is no animal fat in these burgers, they make up for it by using coconut oil, canola oil and/or sunflower oil. Those oils aren’t particularly great for the human body when consumed in high amounts, plus the veggie patties have high saturated fat levels to the point that they’re comparable to beef burgers and sometimes higher.

Vegetables lack flavor, that’s why people love regular burgers because fat equals flavor. To make up for the lack of flavor, veggie burgers add a ton of salt. These plant-based burgers can have more than five times as much sodium as an unseasoned beef patty. High sodium intake can lead to high blood pressure, increasing the risk of heart disease and stroke.

“Are they healthier as far as sodium, calories and fat content? Definitely not,” said Sharon Zarabi, a registered dietitian and bariatric program director at Lenox Hill Hospital.

They not only found that the meatless foods were more expensive in every case, but also that they were about as healthy, sometimes less healthy, as the beef products. Some of the meatless offerings had more saturated fat and calories than the beef equivalent.

Bad news if you were hoping "meatless" burgers were healthier https://t.co/jHHjkDqofA pic.twitter.com/Vv75KJ3uiY

People tend to think plant-based burgers like the Impossible Whopper are way healthier than fast-food originals. Here's how they actually match up: https://t.co/tWjP6zfWil pic.twitter.com/1vEqyIFb6i

The area where the meatless burgers are better is in cholesterol. The plant-based burgers have little to no cholesterol whereas a Whopper can have 90 milligrams of cholesterol. Consuming too much cholesterol can raise LDL levels, which is linked to heart disease.

RELATED: Chick-fil-A Introduces Keto Menu But That Means You Can’t Have Some Of Your Favorite Fast-Foods

Eating too much red meat is also linked to cancer, especially when it is grilled or pan-fried, according to the World Health Organization. Red meat was classified as Group 2A carcinogen, with elevated risk for colorectal cancer.

The other positive of plant-based food is that it is better for the environment. Cultivating livestock not only sucks up a lot of resources but it is also a huge emitter of methane. Livestock were responsible for approximately 14.5 percent of global greenhouse gas emissions, according to the United Nations’ Food and Agriculture Organization. The biggest offender was cows and their burps (not their farts). Cutting down on greenhouse gases is believed that it would slow and potentially reverse global warming trends from climate change.

So go out there and have a Whopper or an Impossible Whopper or chicken sandwich, whatever makes you happy, just remember that a diet with moderation is generally best and not to overdo it with any one particular food.

RELATED: McDonald’s Gives You A Taste Of Their Favorite Foods From Around The World With New International Menu