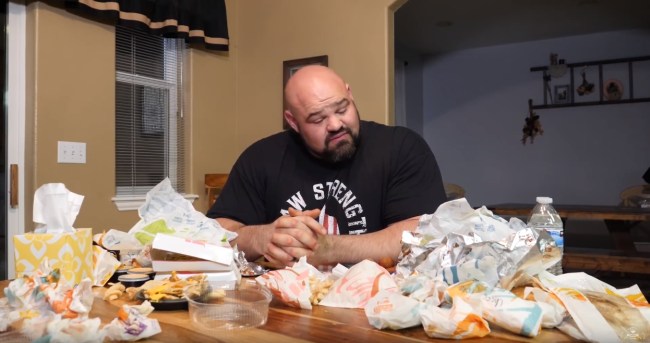 There are eating challenges and then there is lunacy. What Brian Shaw did qualifies as the latter. Shaw, who is a four-time winner of The World’s Strongest Man, decided to eat the entire Taco Bell menu. The competitive strongman dared to attempt to eat every item from the menu of Taco Bell, which is about 20,000 calories, and he survived to tell the tale.

Standing at a towering 6’8″ and weighing 415 pounds, Brian Shaw is a mountain of a man. The strongman doesn’t fear anything, but an eating challenge brought the goliath to his knees. Generally speaking, Shaw eats an average of 12,000 calories in one day, including 6 pounds of steak. In this YouTube video, Shaw consumes 20,000 calories of pure Taco Bell.

Shaw went to his local Taco Bell in Brighton, Colorado, and ordered every item on the menu, which cost $120.03. Shaw even ordered multiple quantities of some items, such as treating himself to three caramel apple empanadas.

Shaw was having a grand time at the beginning of the video shoveling fast food down his throat. But then within minutes, regret started to fill his soul. At one point in the eating challenge, a “weird sauce” took him out of his game and he was never the same after that.

Shaw made a followup video to explain the aftermath of the eating challenge. “That was an awful idea,” Shaw said. “I was regretting that, probably a couple of minutes into the challenge.”

“My stomach started hurting. I started sweating. A couple of minutes into the challenge, my body was just freaking out,” Shaw explained. “It was pretty awful. The toilet took a beating.”

RELATED: Taco Bell Now Offers Party Packages So You Can Throw A Fire Bash Like This 106-Year-Old Did

He said it was the worst eating challenge that he has ever done. Previously, Shaw consumed 14,000 calories while doing a Chick-fil-A challenge, completed a 10,000-calorie pizza challenge and a ate 25,000 during a cheat day binge of Wendy’s, Krispy Kreme donuts, and Ben & Jerry’s ice cream. Brian Shaw must have an industrial strength toilet.

RELATED: Here’s Rafael Nadal Diet That Helps Him Be A Tennis Champion