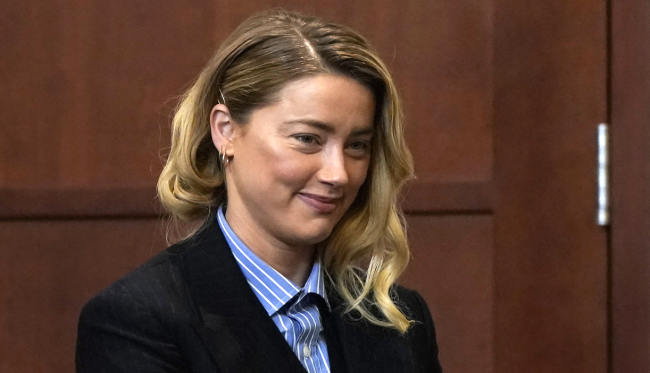 Amber Heard recently fired her PR team, reportedly over the onslaught of “bad headlines” she was received in the midst of her trial against ex-husband Johnny Depp.

However, thanks to her testimony on the stand this week in the trial, her new PR team is now facing an even bigger uphill battle to shine up Heard’s image.

While a TikTok video of people throwing gifts at Johnny Depp as he exited the court house parking lot went viral this week, another TikTok video has gone viral which appears to show Heard contradicting some of her sworn testimony.

In the viral TikTok video, Heard was asked in an October 2011 interview promoting the film if she was a fan of Depp, 22 years her senior, while growing up.

“I mean who isn’t a fan of Johnny’s? That’s a given,” she replied. “He’s been a cultural icon and a talented actor for since I can remember.”

Amber Heard is being accused of lying, acting, and quoting movies during her testimony

That certainly isn’t going to help quell all the people accusing Heard of “fake crying” during the proceedings.

OMG I'm DYING. Amber Heard is the worst actor EVER. This fake incoherent PERFORMANCE is sickening… All over the place, too many details, fake sighs, forced tears and looks to the jury.. This is an EMBARASSMENT to survivors everywhere. #Heardsay #AmberHeardIsALiar #DeppvHeard pic.twitter.com/cuRxREWgi8

im watching amber heard testify. this woman is putting on the performance of her life. how the hell is she acting as though shes crying mid explanation and not a single tear is in sight, it all just feels so fake and transparent and dramatic.. just feels really weird to watch

Nor will it dispel all of the rumors that she is quoting movies during her testimony.

Amber Heard: "When I was around Johnny I felt like the most beautiful person in the world—then he would disappear"

Talented Mr. Ripley: "The thing with Dickie, it's like the sun shines on you and it's glorious—then he forgets you and it's very cold"

Watch the clips side by side pic.twitter.com/WKkvjLfDKL

Amber Heard: “He said, ‘I’d rather cut my hand off than ever lay it upon you.’”

Mildred Pierce after slapping Veda: “I’d have rather cut off my hand.”

Watch the clips side by side: pic.twitter.com/BYTbgzMgWh

Amber heard is literally reciting the bottle scene in Gone Girl. This is so disgusting. There are other movie quotes and references too… #AmberHeardlsALiar #JohnnyDeppVsAmberHeardTrial

Perhaps the bots still love her?

The trial, in which Johnny Depp is suing for $50 million in damages and Heard filed a $100 million countersuit, is currently on a break through May 16, when Heard will once again be back on the stand. Stay tuned.