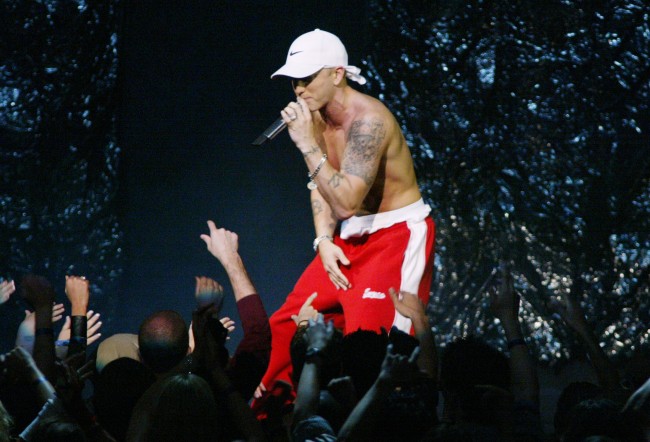 It has been universally reported today that Eminem’s estranged father, Marshall Bruce Mathers II, died at his home in Fort Wayne, Indiana from a massive heart attack at age 67.

Bruce, who married Eminem’s mom when he was 22 and she was just 15, allegedly walked out on the family when his son was just two years old. The anger birthed from Bruce’s abandonment has been an ongoing theme in the rapper’s music–namely in his 1999 hit “My Name Is” when he raps, “And by the way when you see my dad? Tell him that I slit his throat, in this dream I had,” and ‘Cleaning Out My Closet: “My f*ggot father must have had his panties up in a bunch/ ‘Cause he split, I wonder if he even kissed me goodbye/ No I don’t, on second thought I just fucking wished he would die.”

In 2001, Bruce, who had been working construction and had fathered two additional children in California, attempted to reach out to his son at the height of his career. Bruce published an open letter to Eminem in an issue of The Mirror, pleading desperately to make amends and accusing his mother of controlling a false narrative that portrayed him as a monster.

The entire letter was posted to an Eminem fan club Facebook page, but I’ve parsed out some interesting parts below:

HELLO, son. You won’t remember me, though I held you in my arms when you were a baby. You think I dumped you and your mother and never came looking for you. You’re convinced I’m a drunk who never answered any of your letters. Well, I want you to read this and realize you’ve been fed lies all your life. Now you’ll hear the truth for the first time. But I want to make it plain that I’m not after any handout. I work hard, I have money. I don’t need or want your money. But the one ambition left in my life is to give you a hug and tell you I’ve always loved you.

Bruce continues by attempting to convince his son that he enjoyed being his father, taking joy in “feeding you and doing your diapers.” The relationship between Bruce and Debbie became irreconcilable, and it would prove to be the death sentence for a father and son.

But sadly the atmosphere between us deteriorated. We’d moved to our own apartment, and one day when you were about 16 or 17 months I came home from work and everything was missing. It was deathly quiet, no sound from the kitchen or from your room. Furniture, pictures, everything was gone. There wasn’t even a note. I got in my car and started to drive around anywhere you and your mum might be. I now believe you’d gone south to Missouri where Debbie had family. It was like a bolt from the blue. To read now that it was me who walked out makes me choke with tears of rage. I spent six weeks looking everywhere for you both, I was distraught. Eventually I got divorce papers, but it was all done through lawyers and they wouldn’t tell me where you both were. There was never a day in court, it was all done on paper. After about a year I gave it up, I just had no more energy for it. In the movies you’d track someone down, but in real life you can’t do that. You have a job, you have to work, you don’t have unlimited cash to go hunting around the nation. I’ve since read interviews where you say you wrote letters to me and they came back, ‘Return To Sender’. I can say on the word of God that I didn’t receive even one letter from you. Anyway, in 1975 I moved to San Diego, fell in love again and had a son and daughter. Michael’s 23 and Sarah’s 21. They’re the half-brother and sister you never met.

Condolences to the family and friends.🙏

Bruce claimed that his son, Michael, was the first person to come to him with news that the son he hadn’t seen in nearly two decades was becoming one of the best musical artists of all-time.

In fact it was Michael came to me and said there was this new rapper on the scene and his real name was the same as mine.I didn’t think anything of it, then someone showed me Rolling Stone magazine and there was a picture of Debbie holding you when you were little (pictured left). It freaked me out. On my behalf, Sarah wrote to you via your record company saying that I was alive and well and giving an address in the hope you’d get in touch. We didn’t even get an acknowledgement as a reply.

The letter ended with Bruce pleading for his son to contact him.

I just want you to know there hasn’t been a day when I haven’t thought about you. I’m saying all this in the News of the World because they’re the only paper who’ve bothered to find the truth. I’d get on a plane right now, this second, and go anywhere in the world if you’d meet with me. Please get in touch.

This was the only known attempt of Bruce contacting his son, and it fell on deaf ears. During a 2010 interview with Anderson Cooper for 60 Minutes, Eminem expressed no desire to meet his father, saying, “If my kids moved to the edge of the earth I would find them, no doubt in my mind. No money, no nothing, if I had nothing I would find my kids.”

Bruce died without his son ever speaking to him.