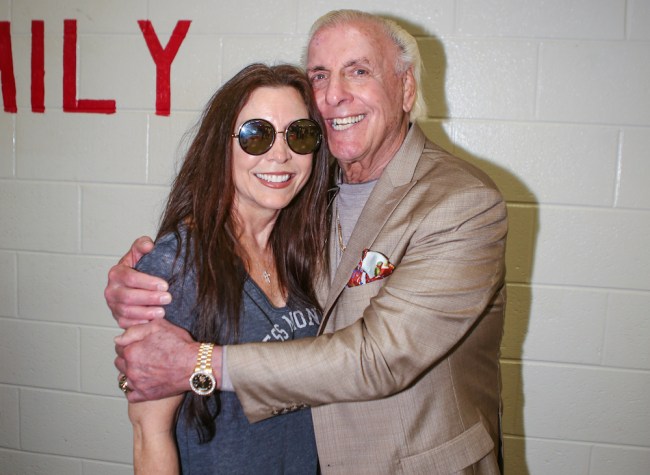 Unfortunately, Flair is now possibly screwing with the health and welfare of complete strangers.

Flair, 71, was spotted making a Starbucks run without a mask while his wife, Wendy Barlow, tested positive for COVID-19 and “The Nature Boy” is also at high risk of contracting the disease.

Flair, an advocate on social media to help stop the spread of coronavirus and to practice social distancing – even going so far as selling masks on his website – was spotted at a Georgia Starbucks without a mask on and handing cash to a barista.

Ric Flair confirmed to the NY Post that his wife has COVID, but says they're staying on different floors of the house.

He also denies having COVID himself. https://t.co/0FBsDf78ug

According to the New York Post, a source familiar with the matter said, “Flair already has the virus and tested positive two days prior on Wednesday — but he denied that claim.” The source also claimed Barlow is “very ill” and Flair is “mostly asymptomatic aside from some coughing.”

The Post reached out to the former professional wrestler and current WWE on-air talent.

“That is absolutely incorrect,” Flair told The Post. “My wife does [have the virus]… we live in a 5,000 square foot home. I live in the basement. She lives upstairs on the third floor and she got sick.”

Flair suffered a major health scare in August 2017 after complications from a blockage in his bowels. Doctors were forced to place Flair in a medically induced coma, and he spent a month in the hospital. “The Nature Boy” himself has admitted it’s a miracle he’s alive.

The Post also points out that while Georgia Gov. Brian Kemp has refused to implement a state-wide mask ordinance but the state’s department of public health requires people to stay home if they test positive for the virus or have been exposed to someone who has COVID-19.