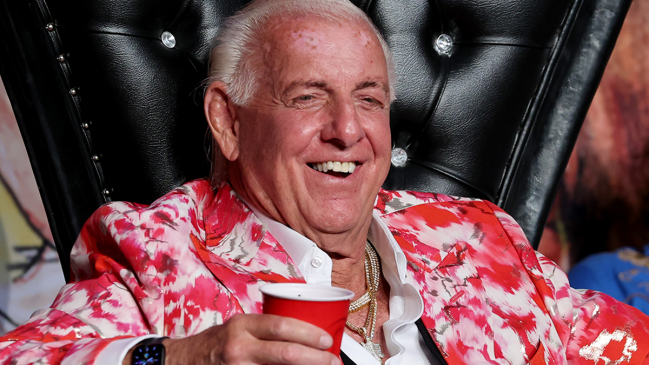 It’s been more than five years since Ric Flair was placed in a medically-induced coma after succumbing to multiple organ failures stemming from his hard-partying lifestyle, and it’s safe to say he’s come a long way since he found himself staring death in the face.

It didn’t take the pro wrestling legend long to get back in the ring, and while it seems like he’s left the squared circle behind for good after participating in what was marketed as his “last match” earlier this year at the ripe young age of 73, he still has plenty of other things on his plate.

The Nature Boy kept busy over the summer, as he launched a new venture in the form of the ghost kitchen chain appropriately dubbed “Wooooo! Wings.” He may have given up alcohol for good after decades of heavy drinking caught up with him, but he’s developed a fondness for another vice that resulted in him teaming up with Mike Tyson to launch his own strain of weed.

Products from the “Ric Flair Drip” line started popping up in marijuana dispensaries around the country last month, and he pulled out all of the stops to celebrate its arrival in Las Vegas this week.

On Wednesday, Flair drummed up some hype with the help of a video that shows him wielding a slightly untraditional type of “leaf blower” that he packed with his personal strain before sparking it and spreading the love around the gathering he organized.

He followed that up with a clip of him and Tyson sharing a joint and trading “WOOOOO!”s in Sin City just in case you had any doubts he’s living his best life.