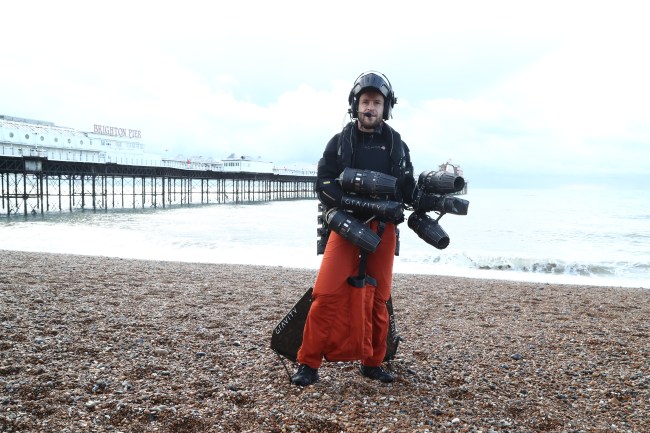 British inventor Richard Browning has been hailed as a ‘real-life Iron-Man’ due to his creation of a jet engine powered bodysuit that allows him to fly through the sky like Tony Stark.

He first debuted the real-life Iron-Man suit over a year ago and it came with a price tag of around $440,000. The suit initially set a world record for the ‘fastest speed in a body-controlled jet engine powered suit (wind-guided)’ with a top speed of 32.02 MPH.

Considering that technology like this had never really existed before that’s fast as hell to be flying through the air in a suit powered by a jet engine. But Richard Browning just COMPLETELY DEMOLISHED his previous world record, more than doubling his speed, as part of this week’s Guinness World Records Day.

The new world record for the ‘fastest speed in a body-controlled jet engine powered suit (wind-guided)’ is a blistering 85.06 MPH and he pulled this off in front of Brighton Pier (England). It’s pretty wild to see him cruising around like this.

“I’m really pleased,” he declared afterwards. “I was confident we should be able to do it but that’s very different to coming here and actually achieving it, especially when we make our lives complicated by putting several other pilots up as well.

“You can never discount the possibility of having a technical problem, so I’m really pleased we’ve delivered what we’ve done. And that is indeed the fastest I’ve ever gone. In training we were doing about 75 mph so that’s significantly faster.

“I didn’t think we’d break what we did in training so I’m very chuffed.” (via) 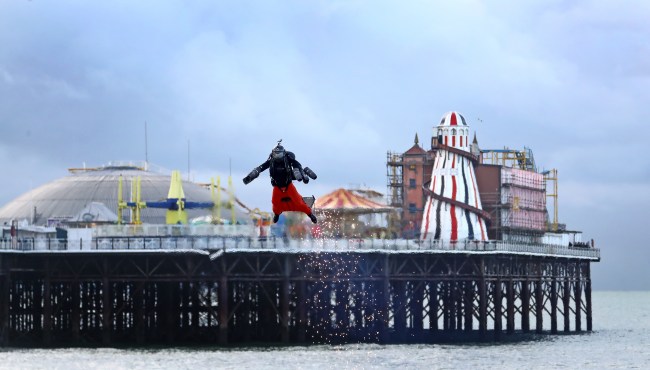 I’m not sure I’ve ever heard the word ‘chuffed’ used in America but I really think we should consider bringing it into our vernacular, my dudes. It’s a great word.

Part of what propelled Browning to a new world record was the typical wind and rain that’s present throughout the Fall and Winter in England was laying flat which meant he was able to rip through the air at top speed.

Here’s what he had to say about what it feels like to fly through the air like Iron-Man:

“It’s pretty exhilarating, the adrenalin flows when you’re hammering along over the waves doing that,” added Richard, who also explained how he enjoyed the change in scenery for this flight.

“When you’re travelling fast over a grey ocean it’s quite difficult even for me to judge my speed. So having the pier and things like the jetski were really good.

“Flying alongside the historic pier makes it very special, and actually when you’re flying out over the sea or a lake and there’s nothing there other than a boat to get to, it’s quite a lonely experience. It doesn’t feel so lonely having a pier right there.” (via)

When asked about when the general public will be able to zip through the skies like a super hero he gave a pretty sobering response. As Richard tells it, this is ‘not the future of transportation in its current form’ and he likens his Iron-Man suit to a Formula 1 race car or the prices of clothing at a fashion show. Items that are not practical for the everyday public to own.

But he goes on to note that the first cars were ‘noise and unreliable’ compared to horses so this suit is an excellent step in the right direction.

To read more about this record-setting achievement in Brighton, you can click here to visit Guiness World Records‘ website.