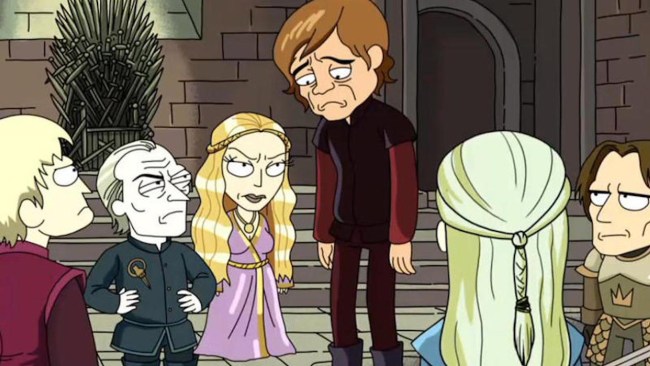 While Game of Thrones has been off the air for over a month now, public discourse about the iconic series’ final six episodes has continued to disseminate through the pop cultural zeitgeist.

Debate about Danerys’ mad queen turn, Jon’s banishment to the Night’s Watch, Bran’s installation as King of the S̶e̶v̶e̶n̶ Six Kingdoms has continued almost ceaselessly in the weeks following the Game of Thrones ultimate cut-to-black.

Not only have fans been carrying on the discussion, but those actually involved with the project have, too.

Just this past week alone, we brought you the stories of Lena Headey revealing that she wished Cersei Lannister had “a better death” and “The Bells” director Miguel Sapochnik discussing how he wanted to kill off “everyone” in The Battle of Winterfell.

And while a majority of the discussion has been focused on the season’s apparent shortcomings, Rick and Morty masterminds had nothing but nice things to say about the work of David Benioff and D.B. Weiss.

In an interview with Entertainment Weekly, Dan Harmon and Justin Roiland — the acclaimed creators of Adult Swim’s smash hit Rick and Morty — shared their feelings on Game of Thrones conclusion.

Harmon was the first to weigh in, via EW:

“I was afraid to watch it for a while because I didn’t want it to end,” Harmon said. “I wanted to keep this soap opera in my life. But I knew it had to end, and I was as satisfied as I possibly could be watching a staple in my life wrap up and all of the characters taking each other out,” he began.

“As a showrunner, I was amazed at the amount they were able to accomplish — especially given the meta-reality of having run out of books to adapt. Watching The Hound fight The Mountain on the stairs, I was like, ‘This is all great, man.’ I was aware of the disappointment factor with [Daenerys Targaryen’s] dark turn. I’m not going to say fans are too cynical and ungrateful, but I guess I did just say that.”

Roiland then chimed in to echo Harmon’s thoughts:

“I echo all of Dan’s sentiments about the show,” he said. “Structurally, I think it was great. I just selfishly wanted more episodes. I wanted to get to those plot points at a slower pace. I didn’t want it to end either. I wished it was stepped out over three more seasons, or three or four more episodes.”

While this may just be a case of showrunners sticking together, its definitely reasonable to assume that those within the television industry have a greater appreciation for the storytelling and productional feat that was Game of Thrones.