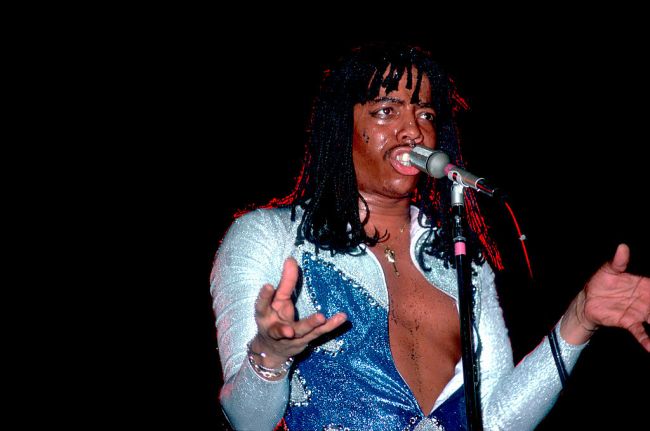 Rick James once said, “Cocaine is a helluva drug.” The now-iconic quote became the focal point of the Chappelle Show‘s sketch titled: “Charlie Murphy’s True Hollywood Stories: Rick James.” A new unearthed story claiming that Rick James went on a pantsless coke binge on the desk of a powerful music exec, but it backfired big time, according to a new documentary.

A new documentary, “Bitchin: The Sound and Fury of Rick James,” revealed a crazy story about the “Super Freak” singer. Kerry Gordy, the ​former manager of James, tells a never-before-heard story about the “Give It to Me Baby” singer demanding promotion for one of his albums, which actually backfired and helped an up-and-coming singer by the name of Lionel Richie.

James was allegedly frustrated by disappointing sales figures for his 1982 album “Throwin’ Down.” According to Kerry Gordy, who is the eldest son of legendary Motown Records founder Berry Gordy, James marched into the office of then Motown President Jay Lasker to deliver his next LP. During the meeting with the music executive, James poured cocaine onto Lasker’s desk, then snorted it. James then reportedly jumped on top of the desk, took out his penis, and shoved his junk into Lasker’s face while screaming at the music exec, “Sell my goddamn record!”

“Then Gordy reveals that, after the singer left the room, Lasker simply said ‘Lionel Richie,’ effectively signaling that all of Motown’s muscle would now be put behind another one of the label’s stars —and James’ career was never the same,” the New York Post reported.

Besides having a competition against Lionel Richie, James also had a rivalry with Prince.

“Rick definitely had an attitude with Prince. They just was competing with one another,” Parliament-Funkadelic bassist Bootsy Collins said in the documentary. “They would pull plugs on each other … and [be] getting ready to go to blows.”

RELATED: Eddie Murphy Reveals What Really Went Down During His Basketball Game With Prince

James, who is from Buffalo, New York, escaped the U.S. Navy and fled to Toronto, Canada. James, who was going by the stage name of Rickie Mathews, was also in a 1960s R&B band with Neil Young called the Mynah Birds. But the band’s manager ratted James out for deserting the military.

James was known for his insane drug use when he was alive, which was backed up by one of his bandmates.

“There was plenty of dope around,” says Stone City Band keyboardist Levi Ruffin Jr. “I think I snorted everything on God’s planet Earth when I was in the band.”

James admitted, “We were f***ing standing on the verge of insanity in those days. Everybody was snorting cocaine. Everybody was taking quaaludes, drinking Cristal and Dom Perignon champagne, and getting butt naked and doing it in the bathroom.”

James is famous for being a kinky guy, but his ex-wife reveals that the singer was more into watching.

“Bitchin: The Sound and Fury of Rick James” premiered Tuesday night at the TriBeCa Film Festival, which will examine the life of the artist born James Ambrose Johnson Jr.

RELATED: Unearthed Clip Of Prince Playing Basketball During A Concert Proves Why He Beat Charlie Murphy