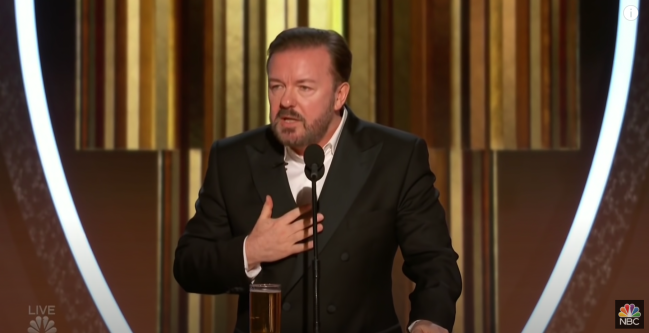 Ricky Gervais said Sunday that he was not wanted by the Academy Awards, and while we can only speculate as to why, I’m willing to wager that his iconic 2020 Golden Globes monologue didn’t do him any favors.

In February, Gervais tweeted that hosting the Oscars would be a “nightmare,” and didn’t seem too salty not to get an invite this year.

It’s The Oscars tonight! I wasn’t invited. Was it something I said? 😂 pic.twitter.com/P87Uau4D9u

“Lucky for me, the Hollywood Foreign Press can barely speak English, and they have no idea what Twitter is, so I got offered this gig by fax.”

“Many talented people of color were snubbed in major categories. Unfortunately, there’s nothing we can do about that. The Hollywood Foreign Press are all very, very racist.”

THE 3-HOUR SLOG OF OSCAR PROGRAMMING

“You could binge watch the entire first season of Afterlife instead of watching this show. That’s a show about a man who wants to kill himself because his wife dies of cancer. And it’s still more fun than this.”

“Once Upon A Time In Hollywood, nearly three hours long. Leonardo DiCaprio attended the premiere and by the end, his date was too old for him. Even Prince Andrew’s like, ‘C’mon Leo. You’re nearly 50, son.'”

“The world got to see James Corden as a fat pussy. He was also in the movie Cats, but no one saw that. And the reviews, shocking. I saw once that said: This is the worst thing to happen to cats since dogs. But dame Judi Dench defended the film by saying this is the role she was born to play because she loves nothing better than plucking herself down on the carpet, lifting her own leg, and licking her own minge.”

Sidenote: Gervais would later admit that for the 2020 Golden Globes, he had to meet with 15 lawyers to make sure his jokes fit the bill.

“So I do the monologue. It’s a tough crowd — 15 executives and some lawyers, right? But I do it and it’s fine,” he recalled. The executives and lawyers approved jokes about ISIS, sweatshops and pedophilia, yet “the big discussion was the riff on the movie Cats.”

The lawyers took issue with the use of the word “minge,” though Gervais explained that it’s a “cute” British term. “It’s not offensive at all. It’s not a swear word,” he said. “They went, ‘Oh, okay.’ And then one of them looked it up and said, ‘It says vulgar term for vagina.”‘

Gervais argued that “all slang is a vulgar term.” The lawyers suggested that Gervais say “vagina” instead. “I went, ‘I’m not gonna say vagina. That’s worse! That’s so clinical about Dame Judi Dench,'” he said. “And he went, ‘I take it back.'” [via Hollywood Reporter]

“Apple roared into the TV game with a morning show, a superb drama about dignity and doing the right thing, made by a company that runs sweatshops in China.”

The Oscars did not employ a singular host for the event last night, so it was just 100% Hollywood navel gazing. Yippie.

That's not a dream, it's a nightmare 😂