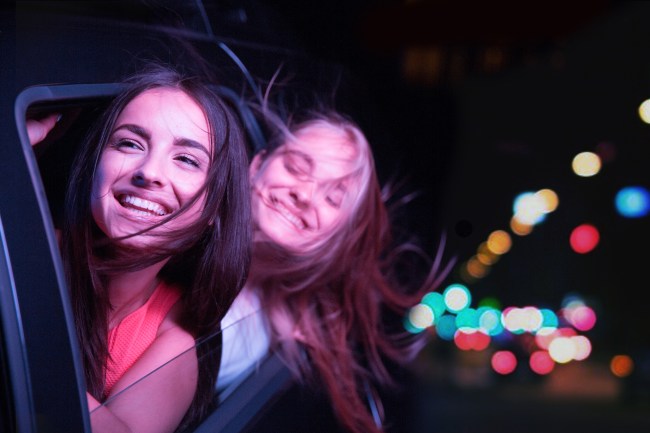 Welcome to the first installment of Riding in Cars with Girls, a weekly column baked with a dash of your dating stories, a sprinkle of the latest pop culture nightmare, and a twist of creative writing—all covered in a thick, viscous glaze of fun. You can find the column every Wednesday right here on BroBible. Like a good restaurant that sources from local farms, the menu will change frequently. Please submit any and all submissions via Instagram DM. I’m @francisccellis.

We’ll use this as a safe space to break down a reader submission about an under-endowed man who overcame the odds. I posted an IG story asking for examples and you wouldn’t believe how many guys responded with “Might as well call it my autobiography” or “just ask my wife.” Cool, haha, thanks guys. On the flipside, I had dozens of women send “doesn’t exist” or a cricket chirping GIF. Once again, cool, haha, thanks gals.

But we’re looking for heroes. And not all heroes wear magnums.

“My good friend has a small penis.”

If we view the friendzone like Dante’s nine circles of hell, this sentence blows this guy straight through the first eight stages without a pitstop for string cheese and yogurt-covered pretzels. Holy damnation, lady. Really starting off without a bang. Poor guy has a better chance of hearing from her because he’s listed as her emergency contact and her wisdom teeth surgery went south than for a booty call. Needless to say, our woeful knight had the odds stacked against him.

One night, a little booze leads to some curious exploration leads to the confused realm where friendship and fuckship blend together. Now he gets to break out his coveted labia strumming technique. Little did she know she was pals with the Fiddler on the Roof of your vagina. And thanks to his prodigious digital dexterity, they’re now in this stage:

“We’re full blown friends sleeping together and I’m pretty sure I’m in love.”

That’s not even a 180; that’s a 540. Don’t forget your helmet, Travis Pastrana. Because putting “(we’re absolutely talking / heading towards exclusivity)” in parentheses makes it seem like it’s an afterthought, a foregone conclusion, a certainty. And if I know men as well as I think I do, when you resuscitate a guy from the friendzone TOO FAST, he starts to feel himself. Gotta bring him out in stages, like a diver surfacing slowly to avoid the bends. Otherwise, he might see the world anew; he might gain the courage to fish farther off shore, thinking his equipment can bring in tuna and swordfish and the mercury-riddled trophies he previously deemed to heavy for his rickety pond trout setup. Just saying, we might be witnessing the dreaded friendzone swap.

Last thing: if a guy’s penis is curved and still “hits the perfect spot,” that’s not a small penis. A small penis should be small enough where you can’t see a curve. It shouldn’t have a direction whatsoever. It needs to sit upon itself, hunkered down and waiting to be uncovered with delicate hands like a grill left out back from the previous owner. And it certainly shouldn’t come within 10 miles of the perfect spot.

Where we point out why we’re passing on a home.

I spend an unforgivable amount of time on Zillow these days. I have no clue whatsoever where, or if, I’ll be living in four months. The future is as murky as forgetting to flush before leaving on a two-weeker and returning to whatever is living in the toilet now. This lack of clarity allows me to input search criteria that is so fantastical, so utterly misaligned with my income, that it’s as though I’m helping Kevin Durant find a new home now that he’s been traded to the Nets. You say you made $37,199,000 this year, Kevin? Let’s see what DUMBO has to offer.

To give you an idea of how widely I cast my home-hunting net, I don’t just search for apartments for both sale and rent; I search for apartments for sale and rent in different timezones. Sure, it would be nice to have more natural light in our New York apartment. But it would be even nicer to have ski-in-ski-out access in our cabin in Sun Valley, Idaho. Joe Rogan is moving to Austin? I hear it’s hot there, guess we’ll need a pool.

I’m a casual Rogan listener. I mean sure, I’ve been looking at homes for sale in Austin on Zillow for the last 2 hours. Never been to Texas. Never even thought of living there. In fact, pretty sure I’d hate it.

But would be nice to have more space. Space for me and Joe to hunt

I’m currently shackled to a lease in New York City, though I’ve spent all of three weeks living at that apartment over the last six months. It sure is fun to toss 70% of your income down a well for what is now, at best, a pied-á-terre. My girlfriend and I have been quarantining in Maine with my folks where the weather is more agreeable and the likelihood of being pied by a handful of homeless fecal fudge is nearly zero—a welcome change from the gauntlet of shitslappers I have to navigate to and from my morning iced oat milk half-caff in midtown Manhattan.

Today’s property is an almost perfect 5-bedroom, 6 bathroom townhouse in the heart of romantic West Village. It features a wine cellar, a gym, multiple outdoor spaces, and ceilings so high that your dinner guests will return home and hate themselves. 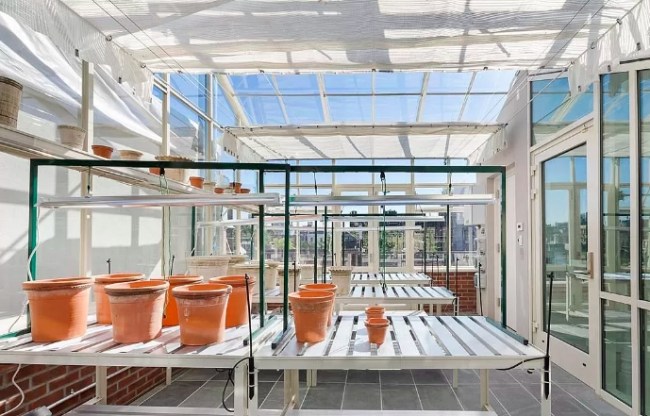 A rooftop greenhouse is the perfect way to start an illegal grow operation in the center of the big apple. But as you can see, the walls of this greenhouse are made of glass. Thus, a nosy neighbor would easily spot the plants through a telescope, report me to the local precinct, and I’d be out a harvest.

Carrie Bradshaw would swoon and purchase this $28,000,000 home immediately on her romance columnist salary (goals!) but I must stay my trigger finger. For although the south-facing garden sends my heart soaring, I’ve always wanted to grow my own marijuana with the peace of mind that no snake neighbor would rat. And the garish transparency of this greenhouse is almost a challenge to any local vigilantes.

Consider this the front of the family fridge. Whatever’s cute, I’ll pin on here with a wobbly-eyed magnet. This week, a seasonal poem! 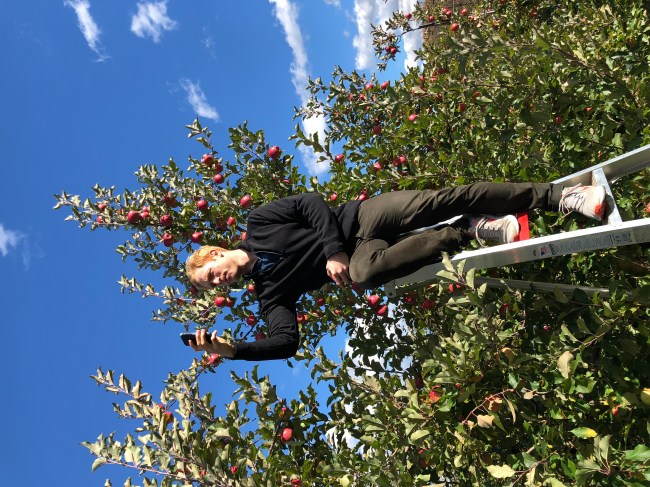 Dust off those boots, unwind your scarves

The air is crisp and peacoats abound

As red leaves and yellows fall to the earth

Let’s head to the orchard, my love said to me

To fill up a basket with nature’s delights

Get those golden delicious out of my sight.

As we stroll under branches that bend from their fruit

I know then and there that our day is a sham

“This one right here” she says; she’s found the tree

“Do you think I’ll look cute with an apple in my mouth?”

Like a pig at a dinner? Tbh I don’t care

“Back up a bunch,” she calls from a distance

This isn’t her first rodeo

I pick up my pace, I might as well jog

She tends to get more likes the farther I go

Ugh, this lighting is hideous

Now take a few panos, and maybe a time lapse

And let’s do some slow-motion videos”

Oh panorama, you haunt my nightmares

I can’t keep the arrow steadfast

I’m too high above it, I’m too far below it,

And even when I’m on it, I’m moving too fast.

Our bounty in hand, we’ll head straight for home

Ciders and pies and sauces and jams

While she chooses filters to make her look best.

And once it’s been posted, we’ll monitor likes

The apples will rot, but her post will live on

A tone deaf moment from around the world. This week’s lucky case study?

When I was six or seven, my family took a vacation to Jamaica for spring break. Pretty sure it cost about $300 for the entire family to fly roundtrip on Continental back then. My older sister, at eight, was desperate to have her hair done in braids like Venus and Serena Williams. Mom took her to a seaside salon and for the next two weeks, my sister swished her hair around like when you push into one of those bedrooms that has beads hanging instead of a door; tacky glow-in-the-dark constellations on the ceiling; a room sponsored by Spencer’s Gifts, with beanbags and lava lamps and lost souls festering in the gloom.

I say this to get ahead of it because, even though our family destroyed all the photographs from that trip, you can never be too careful. My sister was eight, and now she knows better. She grew up and became a smart, beautiful woman who would never be so stupid as to replicate a predominantly-black hairstyle in this time.

If only we could say the same for Adele.

I’m not here to comment on whether this is cultural appropriation or simply celebrating/admiring the culture by dressing up a certain way. That’s all over my head.

What I CAN say is that you’d have to be a braindead lunatic to achieve superstardom, do your hair in bantu knots, and post an Instagram of it these days. EARTH TO FAMOUS PEOPLE: WE ARE PAST THE POINT WHERE YOU CAN SAY “I DIDN’T KNOW THAT WAS WRONG.” Playing dumb is over. Obviously Adele didn’t do this to be an asshole. Everyone loves Adele. But if you’re going to dress up in the custom of a certain culture—even if it’s to celebrate that culture—you better run that photo by a publicist, a tribunal of Jamaican scholars, and PETA before it hits the internet. Better to be safe! Be safe!!

Recently, blackface costumes dug up from yearbook photos taken 30 years ago have ruined careers. And that’s 30 years ago. If you’re a public persona, TODAY in 2020, and you post a photo of yourself in anything other than completely safe clothing/makeup/hair and the internet comes after you, it’s on you. It’s fine not to know exactly where the line is. It’s lightspeed stupid to post and hope for the best.

Lastly, does this mean that guys can no longer buy those fun Bob Marley rasta hats with the fake dreads coming out the back? Seems like those are probably toast. Damn.

And that’s all for today. See you next week!