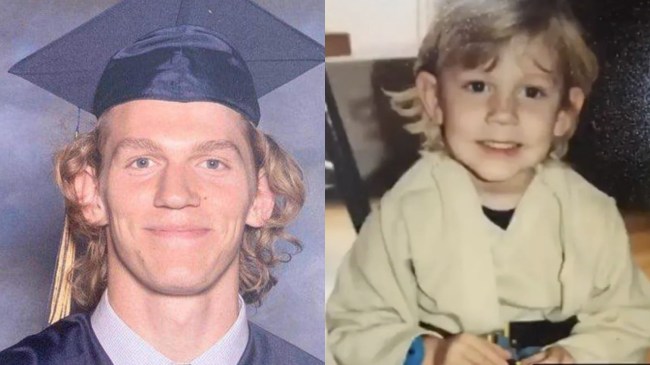 When it comes to the discussion around Star Wars, most of the internet discourse can be utterly toxic.

From entitled fanboys to spoiled critics to the simple haters among us, the conversation surrounding the galaxy far, far away can usually be tiresome, destructive, and generally pointless. But not this time.

Earlier this year, 21-year-old University of North Carolina-Charlotte student Riley Howell was tragically killed after he sacrificed his life in order to save others during a shooting on April 30. Police say that due to Howell’s heroic actions, countless lives were saved, as the gunman — Trystan Andrew Terrell — subsequently told detectives that Howell’s tackle had caused him to stop firing.

Following Howell’s devastating passing, the former UNCC student and ROTC Cadet was awarded posthumous military honors for his actions, among other tributes made in his name. However, it may be the latest gesture made in his honor that would have meant the most to the fearless young man.

According to those who knew him, Howell was a massive Star Wars fan, as there are countless photos of him dressed in Jedi Knight garb or playing with Star Wars action figures and lightsabers. And apparently, someone at Lucasfilm took notice of Howell’s combination of breathtaking bravery and love of Star Wars, as a Jedi Master named Ri-Lee Howell has been officially entered into Star Wars canon as a “Jedi Master and historian”.

Matthew Westmoreland, a friend of Howell’s and brother of Howell’s longtime girlfriend, Lauren, said a letter from Lucasfilm Ltd. arrived at the funeral home that handled Howell’s arrangements in May. Apparently, someone online read about Howell’s interest in Star Wars and reached out to the company behind the franchise.

“Riley’s courage and selflessness brings out the Jedi in all of us,” Lucas Seastrom of Lucasfilm’s Fan Relation Team wrote in the letter addressed to the Howell family.

Seastrom said that as a “small tribute” the Lucasfilm story group “has incorporated a re-imagining of Riley’s name as a character in the Star Wars galaxy” in a book — “Star Wars: The Rise of Skywalker — The Visual Dictionary” — slated for release toward the end of the year.

On Sunday night, a text to Lauren Westmoreland from an old teacher brought the news. The teacher had bought the visual guide to “Star Wars: The Rise of Skywalker,” which opened in theaters Dec. 20. In it, he saw the name Ri-Lee Howell. [via WFAE] 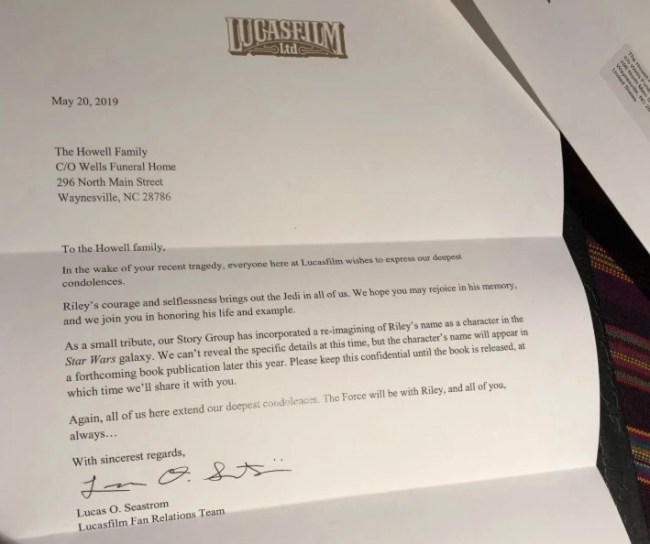 “To the Howell Family, In the wake of your recent tragedy, everyone here at Lucasfilm wishes to express out deepest condolences. Riley’s courage and selflessness brings out the Jedi in all of us. We hope you may rejoice in his memory and we join you in honoring his life and example. As a small tribute, our Story Group has incorporated a re-imagining of Riley’s name as a character in the Star Wars galaxy. The Force will be with Riley, and all of you, always…”

Simply awesome. Rest in peace, Riley, and may the force be with you.

Riley Howell, a huge Star Wars fan and the man who tackled a shooter at UNCC (saving all but one life and his own) joined the Star Wars universe under the name Ri-Lee Howell featured in an upcoming book as a Jedi master and historian pic.twitter.com/dJOhRjDoM5