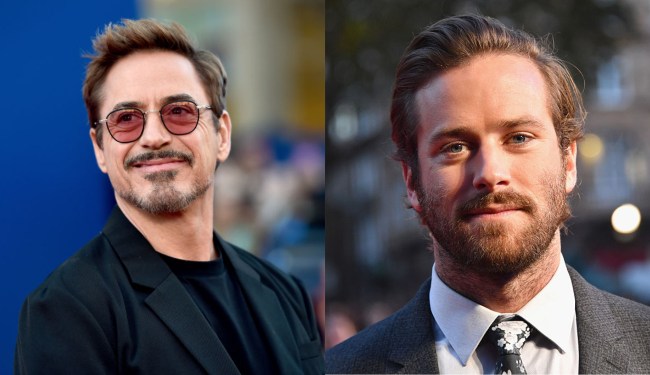 Famed Iron Man actor Robert Downey Jr. has reportedly been supportive of disgraced actor Armie Hammer following the collapse of his career, according to a new report from Vanity Fair.

Back in early 2021, various women made a litany of increasingly disturbing allegations about The Social Network actor Armie Hammer, with rape and cannibalistic threats being among the claims made by women from his past.

As stated in the report, the 57-year-old Downey Jr. has reportedly been both emotionally and financially supportive of the 35-year-old Hammer and has even “provided financial assistance and housing.”

Additionally, Downey Jr. reportedly “stepped in to steer” Hammer to rehab and paid for his six-month stay at the Florida rehabilitation facility the Guest House.

Robert Downey Jr. has reportedly been supporting Armie Hammer in the wake of disturbing allegations

“Everyone looks at Armie thinking that he’s had some sort of privileged life—and that must mean there were no problems in his youth and everything was peachy keen,” said a close friend of the actor’s. “But that’s not necessarily the way things go. Just because you come from an upbringing where financial resources are plentiful doesn’t mean life isn’t without problems.” [via Vanity Fair]

The news about Downey Jr. being in Hammer’s corner comes just about a week after it was revealed that Hammer has recently been living in the Cayman Islands and selling timeshares as a job.

Following the allegations against Hammer, he was fired from various projects such as Taika Waititi’s Next Goal Wins, the Paramount+ series The Offer, and the Jennifer Lopez-starring rom-com Shotgun Wedding. Death on the Nile, which saw the actor star alongside Kenneth Branagh and Gal Gadot, was also delayed for a year before being quietly released earlier in 2022.