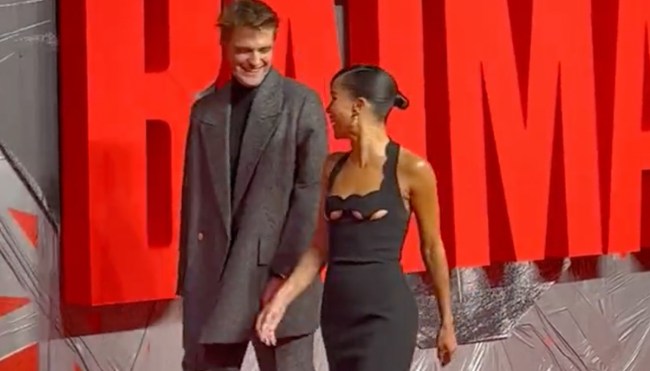 If you told me I’d be a huge Robert Pattinson Guy a decade ago, I would’ve looked at you like you were crazy, but the actor has come a long way since his Twilight days while blazing one of the most impressive paths of redemption you’ll ever see.

Some actors are never able to bounce back from the Teen Heartthrob Stage of their career, but Pattinson was able to expertly rebound with stellar performances in Good Time and The Lighthouse before landing the role of Bruce Wayne in The Batman, which is already garnering heaps of praise ahead of its March 4th debut.

Pattinson has been making the promotional rounds in the leadup to the film’s release, and on Wednesday, he hit the red carpet alongside co-star Zoë Kravitz while rocking a noticeably oversized ensemble.

The bat and the cat. The duo Gotham needs. #TheBatman pic.twitter.com/c3arz9st29

It would appear the baggy getup was a nod to a similar outfit that was donned by Bruce Wayne in the comic books, and while I’d be lying if I said I didn’t think Pattison was able to pull it off, I’d also be lying if I said I wasn’t simply delighted by some of the reactions we were treated to after the suit went viral.

I hope you enjoy these as much as I did.

Rob out here dressed like he just got drafted by the nuggets in 2002 https://t.co/K6VSaeQ9la

Batman out on the streets of Gotham like: pic.twitter.com/XNkiSGzFYg

It was really nice that Robert Pattinson’s dad let him borrow this suit. https://t.co/JYSFDcGuj7

Real nice of Steve Harvey to let Robert Pattinson borrow one of his suitshttps://t.co/7jtYSyT2My