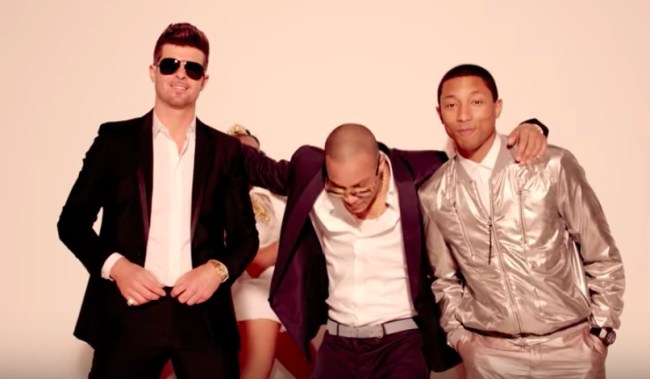 Robin Thicke exploded into the mainstream with his 2013 hit Blurred Lines, a song that will forever be remembered for its music video gifting us Emily Ratajkowski.

The song, which was produced by Pharrell Williams, peaked at number one in at least 25 countries, became one of the best-selling singles of all time, and was nominated for two Grammys.

All was well and good until the family of Marvin Gaye and Bridgeport Music alleged that the song infringed copyrights to Gaye’s 1977 single “Got to Give It Up.” Thicke had been laying claim to being the main writing source of the mega-hit, until the lawsuit, and then backed up and said Pharrell wrote (or stole as Gaye’s family is claiming) the song by himself.

If that doesn’t sound dickish enough, Thicke alleged that there’s no way he could have written the hit song — he was too banged up on vicodin and booze.

“To be honest, that’s the only part where — I was high on vicodin and alcohol when I showed up at the studio. So my recollection is when we made the song, I thought I wanted — I — I wanted to be more involved than I actually was by the time, nine months later, it became a huge hit and I wanted credit. So I started kind of convincing myself that I was a little more part of it than I was and I — because I didn’t want him — I wanted some credit for this big hit. But the reality is, is that Pharrell had the beat and he wrote almost every single part of the song.”

Thicke says he was just “lucky enough to be in the room” when Williams wrote the song.”

Williams and Thicke were sued by Gaye’s estate for copyright infringement and ordered to pay $7 million in 2015. But, on Monday, U.S. District Judge John A. Kronstad lessened that figure to $4.98 million, Page Six reports. Gaye’s family will also receive 50 percent of Blurred Lines royalties in the future.

Williams’ rep called the ruling “extremely disappointing,” and a “horrible precedent for music and creativity.”

“Pharrell created ‘Blurred Lines’ from his heart, mind and soul and the song was not taken from anyone or anywhere else,” Williams’ rep said. “We are reviewing the decision, considering our options and you will hear more from us soon about this matter.”

Robin Thicke’s house burned to the ground in last month’s California wildfire, so to cough up more cash can’t be a high priority.

Here is a video that features both songs and their glaring similarities.