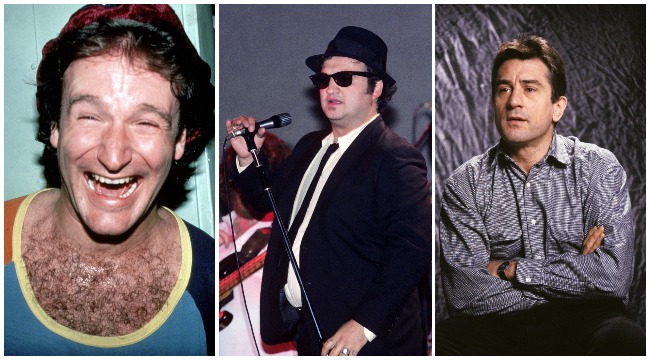 John Belushi died of a drug overdose at his bungalow in the famed Chateau Marmont hotel on March 5, 1982. The comedian and SNL original cast member was just 33 years old.

The life and death of the legendary comedian has been chronicled in a new book written by Hollywood historian Shawn Levy titled The Castle On Sunset, which is currently being adapted into an HBO series by John Krasinski and Aaron Sorkin.

An excerpt from the book published by The Hollywood Reporter details Belushi’s physical and emotional state during the final days of his life, and reveals that Robert De Niro and Robin Williams stopped by Belushi’s bungalow in the wee hours of the night he passed to snort cocaine and were among the last people to see their friend alive.

Belushi had checked into the Chateau Marmont a week prior with hopes of writing a hit movie, seeing as his two 1981 films, Continental Divide and Neighbors, bombed and his last major success was Animal House four years prior.

But, the writing wasn’t going well, and executives at Paramount Pictures were running out of patience. This pressure and demand for results did not jive with a man who was already deep in his vices, and people began to realize something was very wrong.

His attention span was negligible; he took and made mysterious phone calls around the clock; he was frequently hours late or completely AWOL from meetings and appointments; his hotel room was a pigsty; his speech was scattershot and even incoherent; the clothes he wore were dirty and rumpled; he didn’t seem to be bathing or shaving regularly; he was barely sleeping.

On the night of March 4, De Niro, who frequently indulged in wild late-night parties at Belushi’s basement rec room in lower Manhattan, reportedly tried to convince Belushi to join him for a night out at On the Rox, an exclusive nightclub on the Sunset Strip that let stars run amok. When De Niro arrived at his bungalow, he was disgusted at what he found.

The living room was a shambles — not sloppy, but actually trashed, as if in a rage. And worse, a flinty, hard-eyed woman named Cathy was lounging amid the discarded pizza boxes and wine bottles and dirty laundry as if she had some claim to the place and to Belushi himself. De Niro didn’t like the look of her at all — he called her “trashy” later..

“Williams did, and like De Niro, was creeped out by the scene, leaving after a few words and a little coke,” writes Levy.

“After he left, De Niro, too, stopped in at the bungalow, entering through the sliding glass patio door. He had a few words and a few lines and then took some of the cocaine that was piled on the living room table and went back to his suite. It was some time past 3 a.m.”

That would be the last time either of them saw their friend alive.

The next morning, Belushi was found unconscious by his trainer and bodyguard, Bill Wallace.

Rumors began to spread that there was a situation going on at the Chateau Marmont, and reporters began flooding to the scene.

Among the callers was De Niro, who had been trying to reach Belushi throughout the late morning and wasn’t getting through. Perhaps noticing the commotion in the streets below his suite, he called the front desk directly, only to find his inquiries rebuffed. He demanded, finally, to speak to Jierjian, who reluctantly took his call.

The Castle on Sunset hits bookshelves on May 7.