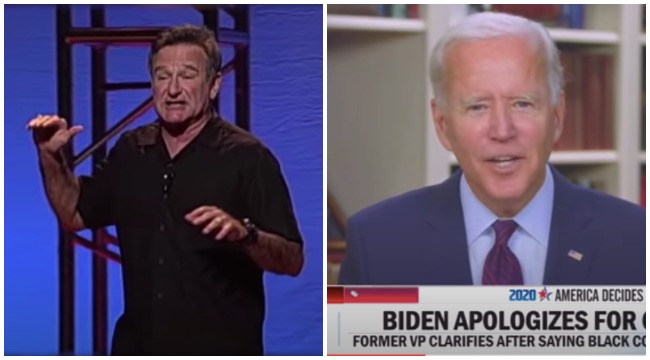 The President of the United States has to be the worst job in America, so there’s an odd reverence I hold for anyone brave enough to take an honest stab at it.

“Hello Mr. President, welcome to office, I left the problems of 350 million Americans on your desk. And sir, the stress of this job will probably kill you.”

Another helping of reverence is slopped on the plate of anyone above the age of 75 applying for a job, any job, never mind the most demanding one in the world.

“Well, Joe. Your organs are really old and I suggest you up your dosage of Lipitor and stay off your fee–”

Dude be with your grandkids.

In any event, Joe Biden, again a 77-year-old man, has already tasted the 729th worst thing about the job: becoming the butt of everyone’s jokes. Especially when you vomit an arrangement of words like this:

JOE BIDEN: Unlike the Black community, Hispanics are an 'incredibly diverse community' pic.twitter.com/PVsyF9oerQ

Biden should be able to withstand any and all “WTF did you just say dude”‘s because one of the most influential figures in recent American history has been ribbing him for a decade.

“We still have great comedy out there. There’s always Ramblin’ Joe Biden. Joe says shit that even people with Tourette Syndrome are like, “no.”

Joe is like your uncle who is on a new drug and hasn’t got the dosage right—‘I’m proud to work with Barack America‘—he’s not a super hero you idiot, come here!”

‘When FDR was on television’ — there was no TV back then, come here, Joe. Sit down.”

I realized halfway through transcribing that bit that trying to write out a Robin Williams standup bit is like trying to play All Along The Watchtower by farting through a walkie talkie. I was too far in to turn around. What a legend.

In more current news, a recent Gallup poll indicates that Trump will win the DJ vote in every state in America.

The Ghost Of Robin Williams 2020

Tyler Norwood's Robin Williams documentary #RobinsWish will feature the Hollywood legend's final days and exclusive interviews with people close to him. Vertical Entertainment will release Robin’s Wish on video-on-demand and on digital on September 1. 🧡 pic.twitter.com/Jv4cVmfenD