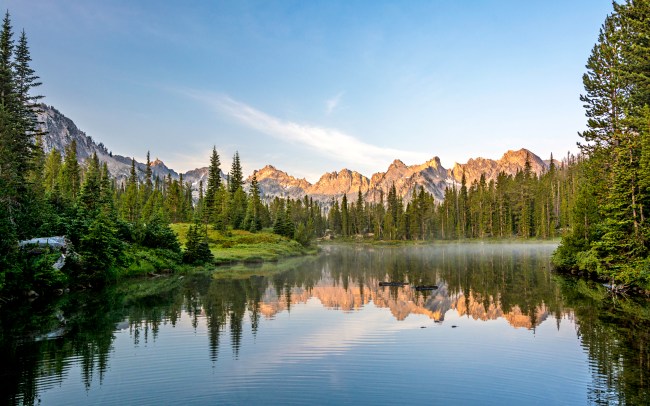 A video filmed in Idaho’s Sawtooth Mountains captured the moment an earthquake triggered a Summer avalanche of rocks that unfortunately damaged one of the state’s prized climbing areas.

I grew up in Florida where it’s flat AF and earthquakes are virtually unheard of. I think I’ve experienced one in my entire life and I was laying in bed hungover and it just felt like there was a steam roller driving by the house outside and I didn’t think twice about it until later that day when someone asked me if I felt the earthquake. Suffice it to say this is extremely out of my wheelhouse.

According to the website The Inertia, there has been an ‘inordinate amount of seismic activity’ lately in the area along the Sawtooth Fault which is where this was filmed. The earthquake which caused the rockslide/Summer Avalanche you see here was triggered by a 4.2 magnitude earthquake which isn’t much compared to the 6.2 magnitude quake that hit back in March but it was clearly enough to rock this climbing area and trigger the slide.

This looks eerily like a ‘rock blasting’ scene from a movie set in the West where pioneers were carving out mines.

After setting up camp at Baron Lake in the Sawtooth Range, we were rocked by a 4.2 magnitude earthquake that knocked Baron Spire (AKA Old Smoothie) off it’s peak. Watching the spire shift and fall off the peak felt like a dream. There were three climbers camped out at the base where all the debris fell- thankfully they’re all okay. We could hear constant rockfall afterward making it almost impossible to sleep that night. I still have a sore throat from breathing in all the granite. Fred Becky was the first to summit the spire in 1949. https://youtu.be/bOCKIDEb-vg This video is copyrighted.

Unfortunately, the area known as Baron Spire aka ‘Old Smoothie’ was damaged. This is considered to be one of the most challenging climbing routes in the state of Idaho and one that a group of climbers had climbed the day before and had plans to go up again the next day. Obviously, nobody’s climbing that one for a while until they’re able to realize the full extent of the damage and assess the risk.

Side note, Idaho is probably #2 or #3 on the list of states I haven’t been to yet that I really, really need to visit. I get the vibe that people from Idaho have been trying to keep it a secret how gorgeous the state’s natural beauty is so people like me don’t start vacationing there in search of trout fishing, mountain biking, climbing, hunting, and every other outdoor activity that Idaho is offering but not telling anyone about… Kind of like how I went to Utah for my first time last Fall and realized it’s one of the most naturally beautiful places on planet Earth.

And I fully expect people from Idaho to categorically deny how perfect their state is all in an attempt to keep us out. It’s an organized effort to shield the truth about how awesome Idaho is from the rest of us.