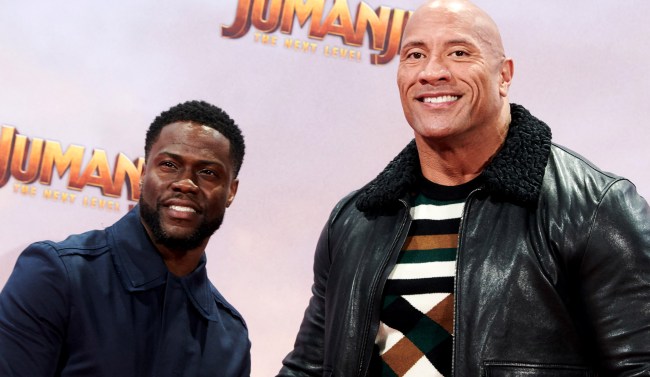 Dwayne Johnson may be known to millions as one of the most popular action movie stars of all time, but to many of us he will always just be The Rock, one of the most entertaining and charsimatic professional wrestlers in the over 100 year history of the “sport.”

The Most Electrifying Man in Sports Entertainment raised the bar when it came to captivating a crowd during his time in WWE and one of the reasons for that were his many signature moves, none more than his iconic People’s Elbow.

The move has been copied and used by pro athletes all over the sports spectrum including Arena Football, college baseball, college lacrosse, the NFL, and professional soccer.

Johnson’s contemporary while in the WWE, Triple H, revealed the ridiculous origin story of The People’s Elbow back in 2017, but no mention was made of why The Rock performed a slide prior to delivering one of his most famous elbow drops of all time.

Earlier this week, a WWE fan account tagged The Rock on a video of a WWF Championship match between Triple H and the British Bulldog from 1999 where DJ, wearing dress shoes, was serving as the special referee and, as one would expect, ended up getting involved in the match.

This will forever be mesmerising… @TheRock pic.twitter.com/AigHHUHOwc

Johnson replied to the video and explained the reason behind the now famous slide.

“The people’s glide. There was residue on the mat from all the pyro 🧨 during the show which made it wildly slippery in my dress shoes,” he tweeted back. “Big love to one of the GOATS, British Bulldog, Davey Boy Smith for wanting to light it up with my People’s Elbow. 🙏🏾💪🏾⚡️ @wwe #smackdown.”

The people’s glide.
There was residue on the mat from all the pyro 🧨 during the show which made it wildly slippery in my dress shoes. Big love to one of the GOATS, British Bulldog, Davey Boy Smith for wanting to light it up with my People’s Elbow 🙏🏾💪🏾⚡️ @wwe #smackdown https://t.co/Yod28xfaYl

Fans were quick to point out how smoothly The Rock pulled it off.

Honestly, it llooked intentional.The overdramatized moves and mannerisms from the early “Brahma Bull” phase were so fun to watch. Really sold us on you as a personality and performer.

The way you never lost your composure for even a second during this moment, & cane to a perfect stop just at just the right moment just cemented your coolness for me. Will always dig this moment. Proud to be #OneOfTheMillions

This is one of my favourite moments in wrestling history. It’s always stuck with me how damn slick it was, how cool you were/are. Absolute history. It also reminds me how much I miss Bulldog.

Looks like as your sliding, you’re caught off-guard that you’re sliding 😂 But this is my favorite Peoples Elbow because of the slide. RIP British Bulldog!

I remember seeing this when it aired. Still the smoothest People’s Elbow, ever.

The Rock also took some time out of his busy schedule this week to do yet another number on his bro Kevin Hart by combining the latest craze, Baby Yoda, with Hart’s sensitivity to being called short.

“Thank you all so much for your well wishes, love & support 🖤 Can’t wait to bring this little nugget home to meet his brother @kevinhart4real. Via @complexpop #iamyourfather,” DJ wrote alongside a photoshopped pic of him holding Baby Yoda.