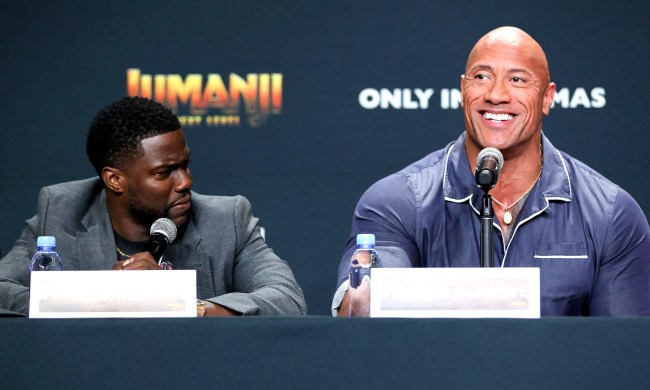 Now that he is feeling better following his hospitalization for a devastating car crash, Kevin Hart is primed and ready to fire up his hilarious feud with his buddy Dwayne “The Rock” Johnson.

Hitting the road together for the Jumanji: The Next Level global press tour, The Rock and Hart each posted a video at the same time with two very different perspectives on how things have been going on their trip.

Johnson’s video features, or at least tries to feature, new additions to the Jumanji cast, Danny DeVito and Danny Glover, who Hart says he too was going to introduce to his fans as he interrupts The Rock’s video and “pissing [him] off.” So, naturally, Johnson continued to film and talk about them, making Hart angrier and angrier. Their efforts to one-up each other is, as usual, entertaining as hell.

“It. Never. Ends,” The Rock captioned his video.

Hart’s video, on the other hand, is basically Kevin trying to fend off The Rock hogging his screen time, and “his Danny,” with a series of F-bombs. Too damn funny.