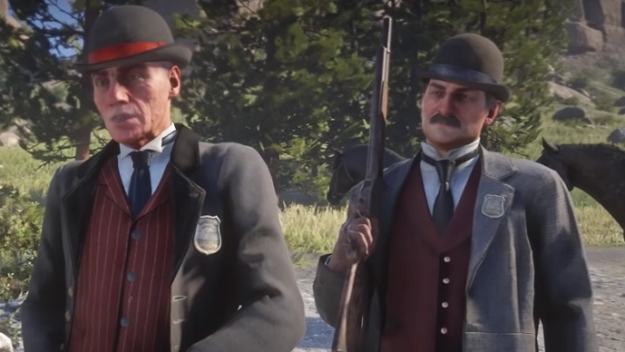 You’d surmise that making a video game set in 1800s would be a safe bet to not being sued by people since everyone you might depict would be dead. But this is America and just because people are dead does not mean that their ancestors or even strangers won’t try to sue the pants off of you. That is the case in a lawsuit filed by the real-life Pinkerton Detective Agency against Rockstar Games and Take-Two Interactive for their depiction in Red Dead Redemption 2.

In Red Dead Redemption 2, a team of detectives named the Pinkertons are tracking down Arthur Morgan and the rest of the Van der Linde gang. The Pinkertons founded their agency in 1850 and Pinkerton Consulting & Investigations is a real detective agency that still exists to this day. The Pinkerton National Detective Agency played a major role in law enforcement of the Wild West in the late 1800s. The U.S. government hired Pinkerton to hunt down infamous outlaws such as Jesse James, Butch Cassidy, and the Sundance Kid. The current-day Pinkertons are suing Rockstar Games and Take-Two Interactive for their depiction in RDR2.

In December, the Pinkertons sent a cease and desist letter to Rockstar Games and Take-Two Interactive. Pinkerton Consulting claims that Rockstar Games had a “clear affection” for Pinkerton by using the name in Red Dead Redemption 2. The lawsuit alleges that using their name makes many people believe that the Pinkertons were directly involved in making the hit video game. In the lawsuit that was filed last week, Pinkerton Consulting & Investigations is demanding that Take-Two pay an unspecified lump sum fee or a share of royalties in the future.

Pinkerton president Jack Zahran claimed that the agents in the game are depicted as villains, which is a “baseless” and “inaccurate” portrayal of Pinkertons. “Pinkertons are seen shooting horses, shooting guns and firebombs into buildings where women and children are present, and as violent villains in the community. History tells a different story,” Zahran said. Pinkerton suggests the massively popular game has forced Pinkerton employees to now “have to explain to their young game players why Red Dead Redemption 2 encourages people to murder Pinkertons.”

Rockstar and Take-Two argue that the Pinkerton agents are fair use and protected under the First Amendment. “Put simply, [Pinkerton] cannot use trademark law to own the past and prevent creators from including historical references to Pinkerton agents in depictions of the American West,” Take-Two said in a statement.

The video game companies say that the appearance of the Pinkertons are one of a “myriad of ways that Red Dead 2 accurately portrays the historical Nineteenth Century American landscape.” In Red Dead Redemption 2, Pinkerton agents Andrew Milton and Edgar Ross are major characters throughout the game. “The inclusion of Pinkertons in the Red Dead 2 story is neither excessive not exceptional,” Take-Two contends. The Pinkertons appear in 10 of the game’s 106 missions.

Take-Two points out that they use the original name of the group, Pinkerton Detective Agency, and not the company’s current name, Pinkerton Consulting & Investigations Inc. The Wild West agency is now owned by Swedish security company Securitas AB. Take-Two also notes that the game uses Pinkerton’s historical badge, not the current one.

“Creative works about the American West are permitted as a matter of law to include such real historical events, figures, and businesses,” Take-Two argues. “Particularly where there is no likelihood that consumers will be confused about the source of the creative work, trademark owners should not be permitted to use trademark law to harass authors, chill speech, and diminish the historical tenor of works like Red Dead 2. Historical fiction–television, movies, plays, books, and games–would suffer greatly if trademark claims like [Pinkerton’s] could even possibly succeed.”

Rockstar Games and Take-Two highlight that the Pinkertons are referenced in the Deadwood TV show, the Bioshock Infinite video game, The Long Riders movie, the Elton John song Ballad of a Well-Known Gun, and Weezer’s album of the same name. When the agency tried to sue those media the lawsuits were rejected in the past.

Red Dead Redemption 2 sold over 17 million copies in the first two weeks of its release, so Pinkerton Consulting & Investigations smell the chance at grabbing some of that enormous wealth. However, Rockstar and Take-Two countersued Pinkerton and want the agency to pay the legal fees and other expenses related to this case.

Here is a video explaining who the real Pinkertons from the 1800s were.