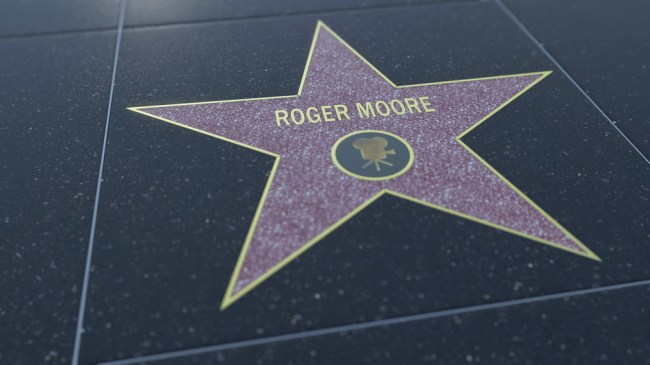 There’s been a lot of James Bond news over the past 48 hours. First, Daniel Craig said he was on the fence about returning as 007 and that it might not happen. Last night, Craig was a guest on The Late Show With Stephen Colbert where he confirmed that he will be returning for one last hurrah as James Bond. For what it’s worth, the NYT reported last month that Craig would be returning so there’s a chance we’re all puppets who have been strung along over the past few days.

I don’t know how I got on such a rant about Daniel Craig because we’re here to talk about Roger Moore. I’ll admit that Roger Moore is my least favorite of all the men to play James Bond. Sean Connery is #1, Daniel Craig #2, and after that, it’s a tie for mediocrity. The fact that Roger Moore’s amongst my least favorite Bond actors has always led me to judge him a little bit as a man, until now. I was cruising through Twitter and saw a Vanity Fair article titled ‘8 Movie Stars with Unbelievable Contract Clauses’…I clicked and saw Roger Moore’s contract clause for James Bond and realized that maybe I’ve been unfairly judging ol’ Roger all these years:

What better way to get into the James Bond spirit than by having an endless supply of fine cigars? That’s what the late Roger Moore required in order to sign on as the next 007 in the ‘70s, apparently getting “unlimited” Montecristo cigars written into his first contract.

There’s a valuable lesson to be learned here. When you are negotiating a contract you have the choice of including anything you want. It’s a negotiation. The worst thing that can happen is the other side says ‘no’ and you’re forced to pull it from the contract. Roger Moore swung for the fences and demanded unlimited Montecristo Cigars. Maybe you want a 2-hour lunch break instead of 1. Or you want 30 days of vacation instead of the company’s garbage 10-day policy. The world isn’t going to give you any handouts. You need to ask for what you want in life, bros.

Side note: how great is this GIF?

When Roger Moore Was 'James Bond' He Had The Greatest Contract Clause In History https://t.co/h4Ano7Isu4 pic.twitter.com/BalgZKuP9y

Take a lesson from the late, great James Bond and his cigar contract. (h/t VanityFair)