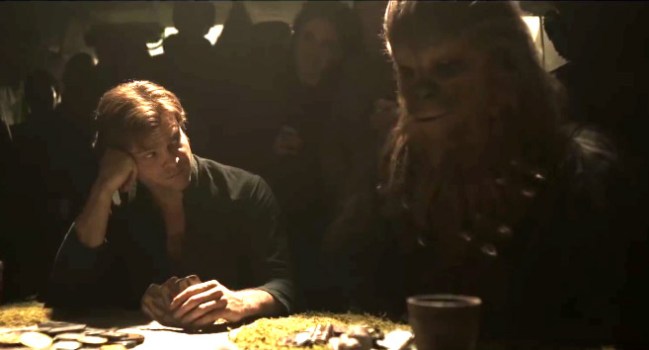 The hype for Solo: A Star Wars Story is starting to ramp up as we close in on being a month away from its release in theaters on May 25th.

As such, we’ve got a couple of new Star Wars goodies for you in the form of a TV spot which dropped on Sunday showing some new footage we hadn’t seen before. Plus, director Ron Howard dropped another photo to his Instagram from the film, this time of Donald Glover as Lando Calrissian.

“From our #ilmvfx review today,” Howard captioned the image. (That would be Industrial Light & Magic for those unfamiliar.)

As for the new TV spot for Solo: A Star Wars Story, it shows how the movie will definitely be the origin story for the lifelong friendship between Han Solo and fan favorite Chewbacca. In this new footage we get to see the beginning of the pair’s sometimes comical and antagonistic relationship and a little taste of the banter that we’ve come to know and love between these two running buddies.

Check out a previous trailer below…

Synopsis: A new adventure with the most beloved scoundrel in the galaxy. Through a series of daring escapades deep within a dark and dangerous criminal underworld, Han Solo meets his mighty future copilot Chewbacca and encounters the notorious gambler Lando Calrissian, in a journey that will set the course of one of the Star Wars saga’s most unlikely heroes.

Oh, and don’t forget, you can still live out your dreams as an intergalactic smuggler with these dope Han Solo Star Wars sneakers.