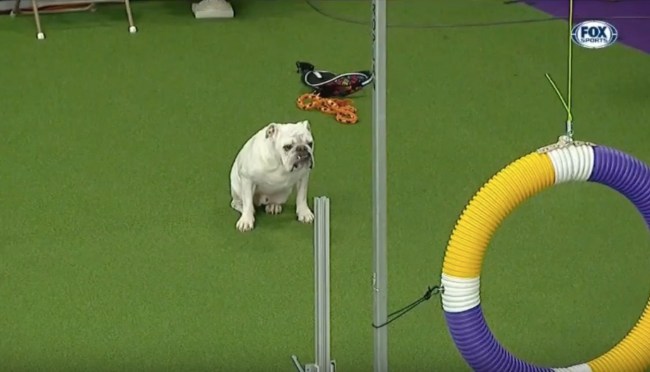 Agility is a type of dog competition where the pups have to navigate obstacles as quickly as possible. They run up planks and in between poles, they crawl through tunnels, and they get dinged for any mistakes.

The Westminster Masters Agility competition is one of the most prestigious agility shows in the nation. I only know this because my parents are absolutely obsessed with agility and have the top-ranked dog in the nation for their breed (Spinone Italiano), so I’ve been hearing about this stuff at every dinner for the past decade.

The dogs that typically crush it at agility are Border Collies, Australian Shepherds, Poodles, and small Terriers. The really quick and small dogs tend to excel for obvious reasons but breeds like the Pug often excel for several reasons. For starters, nobody expects the Pug to be a fast and agile dog so there isn’t a ton of competition amongst the breed. The same can be said about the English Bulldog.

Nobody expects to see an English Bulldog at an agility competition out there crushing it but that’s exactly what happened at the Westminster Masters this year. A bulldog named Rudy stole the show. Twitter couldn’t get enough of this bulldog that was fast as hell.

A bulldog doing agility is a marvelous sight pic.twitter.com/YboGlhp3hk

Bulldogs have a reputation for being fat and stubborn. Bulldog owners are the ones who will tell you they’re stubborn, the rest of the world will argue that bulldogs just aren’t very smart at all. Rudy’s out there to prove that bulldogs can be trained to haul ass across a course full of obstacles as fast as anyone.

This is the most agile bulldog I’ve ever seen. I’ve taken Red through a similar course and it did not go as well. https://t.co/hmGQW3fz2S

Rudy done messed it up for every lazy bulldog out there

Rudy straight up ruined the lives of tens of thousands of bulldogs across the world yesterday when people saw his performance on TV. You know they went straight outside to try and make their lazy bulldogs run some doggie wind sprints and start training.

Rudy I’m proud of you. But you are ruining it for us. Soon humans will expect bulldogs to listen to the,. https://t.co/Bo7a197H93

Brutus says no thanks pic.twitter.com/FWtZt7WqCD

They were sleeping on the bulldog and he nailed it! https://t.co/yHWdYVLsfg

I think the key to agility is a combination of finding the perfect dog and right breed. You need a dog that’s motivated to put in the training needed for these competitions but you also need to find a breed like the English Bulldog that won’t have a ton of top tier competition.

As a rookie, there’s no sense of getting into Agility with an Australian Shepherd because you’ll be going up against people who have been training and competing for decades. But if you were to get a dog like the Mexican hairless Xoloitzcuintli or the Brazilian Mastiff then you’re already winning because you don’t have any real competition.