Fellow Runners: You’re Playing With Fire By Running In The Dark During These Winter Months 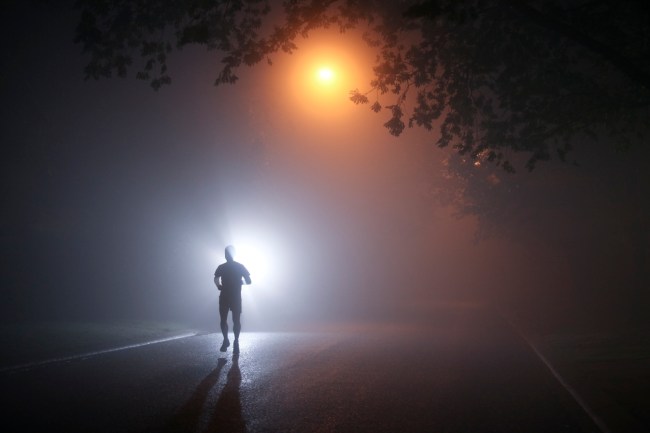 Running in the dark is one of the worst experiences any runner can have. I don’t care if you have a headlamp and one of those blinky little lights for your tricep that alerts cars that you’re out there pounding the pavement, because there are so many other obstacles that still need to be worried about that it’s like you’re walking across a frozen pond hoping that the ice doesn’t crack — and that’s no way to get through a workout.

On the We Run This podcast, my co-host Chris Illuminati and I often talk about a lot of tips and/or stories related to fitness, but one that never occurred to me is offering some help for those running in the dark everyday. After all, it’s peak season for doing so thanks to the time change and shorter days hitting us until about mid-February. So, for better or worse, you either have to adjust or find a new routine — something that isn’t always easy.

I’m not a morning person, so I never run before work. Kudos to those of you out there who do it, because, in my experiences, I often feel rushed the entire workout, and then off all day long. I actually look forward to a run after work as an escape, unwinding from my day with some music for 30-45 minutes or so. Now that it’s dark AF later in the morning and earlier in the evening, though? Well, sayonara, because those days are over for a few months.

So how can somebody still sneak in a workout without running in the dark? First of all, we’re all working from home and there’s never been a more lax time to play a little hooky. I’m not saying you blow off your job, but you might find it more helpful to snack throughout the morning to get some energy, then go out and run during your normal lunch break. Quickly shower up, drink a smoothie and eat some toast with nut butter afterwards. Even if you take 90 minutes max, you still probably didn’t miss much in your day — just don’t advertise your run for coworkers to see.

What Do I Have Against Running In The Dark?

First of all, let’s go back to what I said earlier about that feeling of walking across a frozen pond hoping that the ice doesn’t crack. When people run, they like to free their mind and just… go. In my experiences running in the dark, I’m constantly worried about hundreds of different things happening.

Is there a car that doesn’t see me? Are there uneven sidewalks that could lead to busting my ass? With all the leaves on the ground, could I slip on them and turn my ankle? Is somebody just waiting to pounce on and rob me because I’m by myself? I’ll stop there, because I think you get the picture: When running in limited light, things get sketchy.

For instance, just last night I went for my usual after work run. It was dusk when I left, with overcast skies — so I knew what I was getting myself into and that, at some point, I’d probably be running in the rain. Halfway through the run it was pitch black, rain started falling, and, even with a light and reflectors, I nearly got hit by two cars and almost twisted my ankle on uneven pavement about three times. I was on edge. I was so uncomfortable. I just wanted the damn thing to end. Any runner knows this is no way to get through a workout.

Are There Any Safety Tips For Running In The Dark?

Look, there are some things that are just completely out of your control: And time and weather are just two of them. So if you want to get your fitness in outside (which, right now, is kind of the only way to do it given restrictions on gyms), you have to figure out the best way to do so despite the conditions.

For that reason, if your only option is running in the dark — whether that be in the morning or at night — here are a few tips to do it safely.

One of the best things about running is the community that comes from it. So if you feel like running in the dark is the only way to get some fitness over the fall and winter, then have at it, just proceed with caution. That’s why having a group or at least one other person is recommended. Not only will you have an extra set of eyes on your surroundings, but the run will go faster because you will (probably) be chatting it up during the workout.

My fellow runners: Running in the dark isn’t fun, but with a little bit of planning and common sense, if you need to do it, the experience doesn’t have to be as bad as you think. Stay safe out there.

Love to run… or just like listening to people who talk about running? Here’s the most recent We Run This episode, where we chat with Brandon Westover about setting the record for the most Murphs in 24 hours.