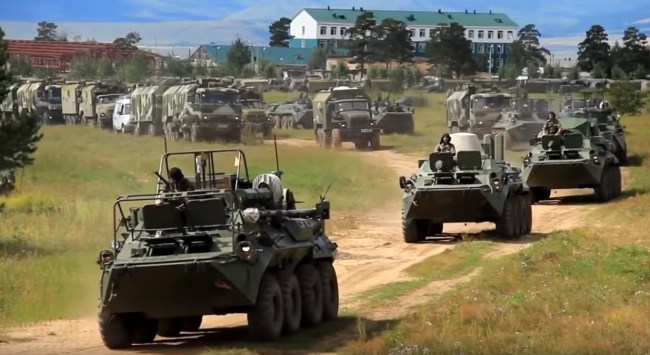 Russia launched their largest military exercise in its history and the massive war games will include military from China. For the first time ever, several thousands Chinese troops and military equipment will participate in the annual Russian military drills that has the Pentagon watching the war games very closely.

Every year Russia conducts large-scale military exercises called “Vostok.” This year is expected to be Russia’s biggest military drills ever with 300,000 troops including 6,000 airborne troops. The war games will also involve 36,000 armored vehicles and tanks, 80 combat and support naval ships, as well as more than 1,000 aircraft including warplanes, helicopters, and drones. The eye-opening war games will also include nuclear-capable missiles.

Russia-China-Mingolia Maneuvers #Vostok2018 starting on September 11 are not directed against other countries and in line with Russian military doctrine. Russia has invited all military attaches to take part in the active phase of maneuvers as observers @mod_russia pic.twitter.com/FBpJMY1CQX

Vostok 2018, which runs between September 11-17, will feature coordinated military drills between several branches of Russia’s military as well as China’s. The war games will take place over long distances to show that Russia can deploy huge forces anywhere in the country.

Military drills are taking place in Siberia and the Far Eastern regions of Russia. Mongolia is also sending troops and military units. The war games will be spread across five army bases, four airbases, and areas near the Sea of Japan, Bering Straits, and Sea of Okhotsk.

Hundreds of thousands of #Russian troops are taking part in the country's largest ever #militarydrills, in a massive show of force that has rattled the West 🇷🇺🎖 #Russia #WarGames #Vostok2018 pic.twitter.com/OC67fmv5R5

“Because (Russia has) an experienced military that understands expeditionary operations whereas China is a little bit new to that and the culture of China has not demonstrated itself to be overtly aggressive in a military way against important powers like the U.S. So, I think the Pentagon is watching very closely but they’re looking at it (Russia and China’s military cooperation) as a long, incremental process,” Lincoln Bloomfield, Distinguished Fellow and Chairman Emeritus at the Stimson Center, a nonpartisan policy research center, told CNBC on Tuesday.

“I’m not sure that the Pentagon is terribly surprised by this (military exercise),” Bloomfield said. “The Russians have been investing in some fairly sophisticated and troublesome systems, they’re looking at the growing access to the Arctic and developing submarines, and I think the Pentagon is watching Russia very closely.”

The week-long massive show of force between China and Russia could be a message to NATO, the United States, and President Donald Trump. NATO has condemned the war games and called them a rehearsal for a “large-scale conflict.” Kremlin spokesman Dmitry Peskov said the exercises were justified because of “aggressive and unfriendly” attitudes towards Russia.

"Dylan White said @NATO was briefed on #Vostok2018… and would monitor it."

Pundits believe Russia and China are cooperating to counter the international influence by the United States. China and the U.S. are currently locked in escalating trade wars. Meanwhile, Russia has become China’s ninth largest trade partner.

The cooperative military drills coincide with talks between Russian President Vladimir Putin and Chinese President Xi Jinping in Vladivostok, Russia. Putin said that Russia and China “have trustworthy ties in political, security and defense spheres.” Xi added that the two country’s “friendship is getting stronger all the time.” In June, Xi called Putin his “best, most intimate friend.”

Putin and Xi took time away from their busy talks to pound shots of vodka and look like they were appearing on s cooking segment for a network morning TV talk show.

Several videos have already emerged of the 2018 Volstok war games.

Russia on Tuesday will launch the biggest military drills in its history involving 300,000 troops as well as Chinese soldiers.#Vostokhttps://t.co/6AEFHs8TZm pic.twitter.com/IKqQoFqqQX

#Video Within the #Vostok2018 #maneuvers, #marines of the #PacificFleet stationed in Primorsky Krai loaded materiel and ammunition on vehicles, made motorized march to the loading area to embark major amphibious ships https://t.co/pXv4kMCyqL #RusMoD #CombatTraining pic.twitter.com/PubcXRodg0

#Video Arrival of helicopters and airplanes of the Air Forces of the People's Liberation Army of China to the Eastern Military District before the Vostok-2018 maneuvers kick-off#RusMoD #EasternMD #Helicopters #Vostok2018 #Maneuvres #China pic.twitter.com/QZt94JZdMu

#Video Marine units and the #Arctic motorized rifle brigade of the #NorthernFleet conducted a tactical exercise in landing amphibious assault on the unprepared coast of the Chukchi sea during the #Vostok2018 maneuvers https://t.co/PKYJuGSeyX #RusMoD #Maneuvres #CombatTraining pic.twitter.com/3eAOt8RkBZ