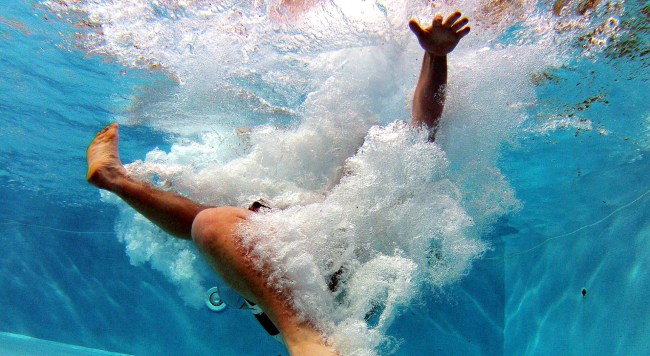 Dimitry Prigorodov, a 30-year-old banker in Russia, thought it would be a great idea to celebrate his milestone birthday with a special dive into a pool. He ended up in the hospital having two operations to fix what he broke on his body.

In addition to breaking the glass partition surrounding the pool he tried to dive into from a window located about six feet up, he also admitted that he tore some “ligaments, the left leg does not work, the hand is the same… I’ve had two operations and had a badly bruised chest.”

Yup, that is definitely going to leave a mark.

“It was my birthday and I rented a cottage to celebrate,” said Prigorodov explaining the dive attempt. “We were celebrating and drinking alcohol. It seemed to us that we could try and jump in principle.”

There was drinking involved, you say?

It’s all good though. As you can see, Dimitry even posted the clip to his social media accounts and says his friends think it’s hilarious. Because it is.

Something else that’s hilarious is the fact that Prigorodov says he didn’t have to pay for the damage he caused to the cottage’s pool area with his misguided stunt because of some “incorrect drafting” in the rental contract.

Totally worth losing the use of one of your arms and a leg, don’t you think?