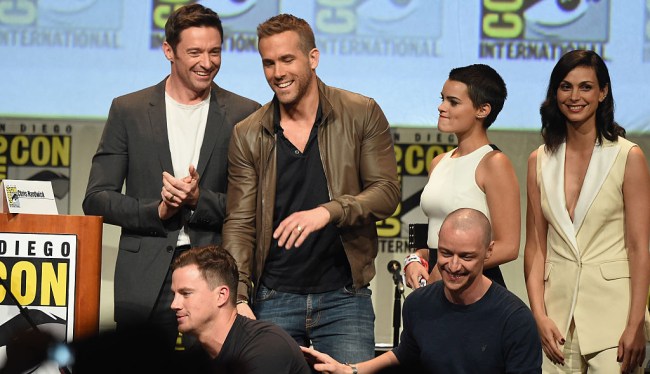 The bromance between Ryan Reynolds/Deadpool and Hugh Jackman/Wolverine is truly #FriendshipGoals. Although, I must say, Jackman seems to be on the buttend of Reynolds’ jokes far more often than vice versa. Not that it looks like he cares too much.

From trolling Jackman in the first Deadpool movie to busting his balls on social media to wrecking Jackman’s anniversary tribute to his wife, Reynolds has been relentless.

Today Reynolds was at it again, this time he showed up in Jackman’s hotel room dressed in full Deadpool gear to ruin a birthday message Jackman was trying to give out on social media.

“When you’re trying to record a heartfelt birthday message … but are interrupted by the least greatest showman,” Hugh Jackman captioned the funny video.

Jackman also posted it to Twitter where some of the comments were as funny as the video itself.

OMG! Hilarious 🤣🤣. Although I think it needs to be addressed that Hugh is in a dressing gown and Deadpool is in his bed! 🙈🤣🤣. Can’t overlook that!! Xx

And that’s how it happened. pic.twitter.com/ZmAU0OupEy

Is he fondling the smooth criminals again??? pic.twitter.com/wnQO8IN9dz

THAT'S EVERYTHING I DIDNT KNOW I NEEDED pic.twitter.com/evwLY6GV9S

I think my internet just broke

in all seriousness, does he carry that outfit with him everywhere he goes?..🤔🤔

Jackman, who has at least once gotten some payback on Reynolds, also re-posted this fan-made Deadpool 2 poster on his Instagram account.