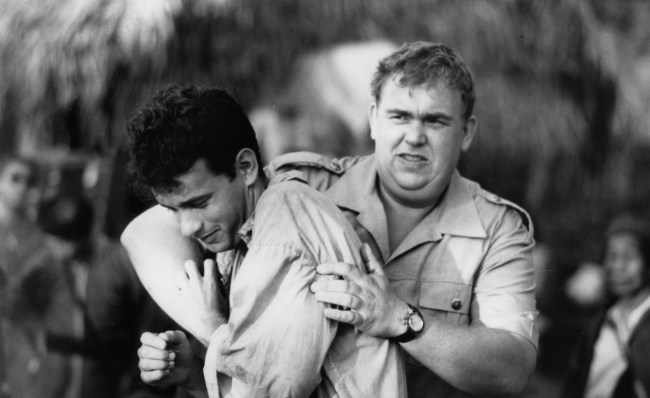 On March 4, 1994, the world lost one of its funniest humans when actor John Candy passed away in Durango, Mexico at the age of just 43-years-old.

At the time of his death, Candy was in Mexico nearing the end of filming the forgettable Western parody Wagons East! when he suffered a fatal heart attack, but there was certainly nothing forgettable about his incredible 25-year career.

From his early work on the groundbreaking SCTV to his appearances in movie classics like Stripes, National Lampoon’s Vacation, and Splash, to starring roles in the films such as Planes, Trains & Automobiles and Uncle Buck, the big Canadian managed to pack a lot of funny into his very short life.

One Canadian who felt the influence of Candy’s work also happend to be one of today’s biggest movie stars, Ryan Reynolds. So on the 25th anniversary of Candy’s passing, Reynolds and crew put together an incredible tribute video compilation to the man and his career.

(Eagle-eyed viewers may have noticed that Reynolds reads the same book in Deadpool 2, that Candy read in Planes, Trains & Automobiles.)

“It’s the 25th anniversary of John Candy’s passing,” Reynolds wrote on Twitter. “We cooked up a small tribute to a comedic genius and Canadian hero. If you haven’t seen much of his work, take a look at his films. He was a treasure.”

The video includes clips from films like those mentioned above as well as Candy’s work in movies such as Home Alone, Spaceballs, Brewster’s Millions, Summer Rental, Cool Runnings, Little Shop of Horrors and more. (If you haven’t seen all of these movies, you really, really should.)

It’s the 25th anniversary of John Candy’s passing. We cooked up a small tribute to a comedic genius and Canadian hero. If you haven’t seen much of his work, take a look at his films. He was a treasure. Thanks to @chriscandy4u and @therealjencandy. 🇨🇦 pic.twitter.com/dHvuviKnBs

After posting the touching tribute, John Candy’s kids Chris and Jennifer both expressed gratitude for the video compilation of their dad.

Thanks Ryan and your crew. This is lovely. ❤️❤️❤️ https://t.co/4TH1mwBxLF

Like I said before . This made me cry. It’s so amazing and sweet ! Thank you ❤️25years tomorrow. Wow. He has so many people that absolutely love him , he was one of the best.

I love John Candy and Planes, Trains and Automobiles is eternal. https://t.co/2awOwPazJf

It’s a true shame that we have all been deprived of watching John Candy for the past 25 years, but his memory will most assuredly live on for many, many years to come.