Ryan Reynolds Did Another Interview With His ‘Twin’ Gordon, Got Trolled By His Wife Blake Lively 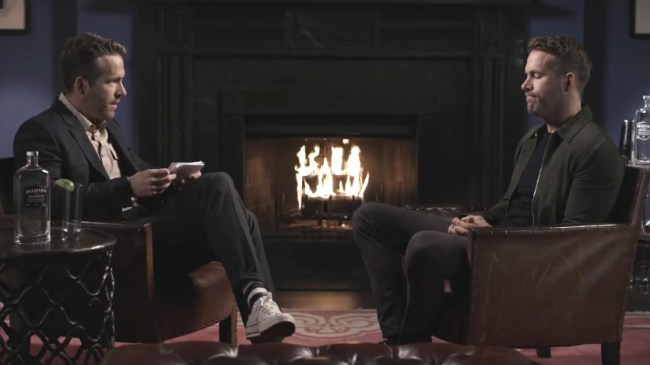 Remember back in 2016 when Ryan Reynolds sat down for an interview with his rarely-seen “twin” brother Gordon and good ole Gordo went in on Ryan for being one of GQ’s Men of the Year? Yes, it was hilarious.

Well, fast forward a couple of years and Gordon Reynolds is back to conduct another interview with his “twin” Ryan, this time to discuss Father’s Day, Deadpool 2 and Ryan’s new role as owner of Aviation Gin.

For example, when talking about Father’s Day, Gordon asked Ryan how his kids were doing and after he said they were good, Gordon chimed in with, “Children of celebrities they always turn out normal I’m sure they’re going to be fine.”

Gordon later proceeds to slam an entire glass of gin from Ryan’s new company and says, “Happy gin day. That tastes like a sunrise had sex with a feather duster. You can use that. You can have that slogan for free if you want.” Ryan passed.

And of course, Gordon somehow hasn’t managed to see Deadpool 2 yet, because, well… you’ll see.

By the way, Green Lantern’s co-writer and co-producer has seen it, and loved it.

That, however, was just the beginning of the fun because since Ryan posted the interview to his Instagram account, his wife Blake Lively, taking any opportunity she can to troll the trollmeister, dropped a comment on the video saying, “Shit. Your brother is hot. I’ve made a terrible mistake…”

Good one, right? Naturally, Reynolds had to respond, as only he can.

“You haven’t made a mistake,” Ryan wrote back. “You’ve been living with him for over a year.”

These two really are #goals.