Internet Collapses In On Itself Due To Report That Samuel L. Jackson Will Voice Garfield’s Father In The Upcoming Chris Pratt Movie 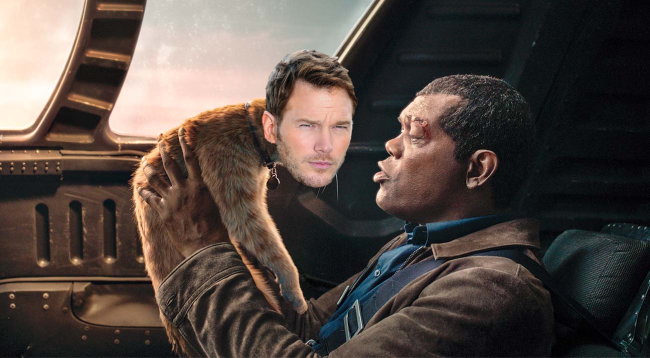 Last fall, the pop-culture corner of the internet seemed to lose its mind as Chris Pratt landed voice roles in animated films about two iconic yet wildly different cartoon characters: Mario the Italian Plumber and Garfield the (Italian?) Cat.

At the time Pratt’s casting in the untitled Mario film was announced, the rest of the cast was also unveiled: Charlie Day will voice Mario’s brother Luigi, Anya Taylor-Joy will voice Princess Peach, Seth Rogen will voice Donkey Kong, and Jack Black will voice Bowser. All things considered, it’s actually quite a fun-sounding cast.

The Garfield movie, though, only announced one casting at the time, and that was Pratt’s. And that was largely all the news we’ve gotten about the film. Until now.

According to reports from various Hollywood trades, none other than the legendary Samuel L. Jackson will provide the voice for the newly created character Vic, who is apparently Garfield’s father.

“WHO ATE ALL THE MOTHER FUCKING LASAGNA!” https://t.co/thsV6uVA2R

and you thought the mario movie was bad? https://t.co/phHtpmIy8G

What is happening here?! I don't want to meet Garfield's dad, I just want to see him fuck a lasagna.https://t.co/vJ1WHITsy1

Can he drag Garfield?

"You ol' lasgana eating SOB! Why you giving that boy Arbuckle such a hard time?" https://t.co/fya9aQAdN9

LASAGNA MOTHAFUCKA! DO YOU EAT IT!?!? https://t.co/bilBv8Le8k

If that wasn't weird enough already, Samuel will be voicing a new character in the Garfield universe, Garfield's Father, Vic. pic.twitter.com/wcZOGewdwU

The fact that Samuel L. Jackson of all people is casted to voice Garfield's father….

— The Critical 'Outside The Cube' Thinking Critique (@ACriticalHuman) May 25, 2022

Fake News. Garfield was the product of immaculate conception https://t.co/O6wQ3gymGN

Finally we’re getting a movie that will put motherfucker, lasagna, and Monday in the same sentence https://t.co/bepCVCvxTV

Personally, I could never hate on any actor for taking on an animation role as it’s essentially the ultimate Hollywood gig, particularly if the film develops into a franchise. Can you imagine how much money Steve Carell has been racking up from theDespicable Me movies over the years? Or Adam Sandler with Hotel Transylvania? Sonic the Hedgehog just came out in 2020 and they’re already working on the *THIRD* movie! Go get that cartoon bag, Chris.

At this time, the untitled Garfield film is scheduled to hit theaters on November 22, 2023. The Mario movie is also dated for 2023, as is Guardians of the Galaxy Vol 3. Pratt will also be starring in Prime Video’s The Terminal List, which debuts on July 1.