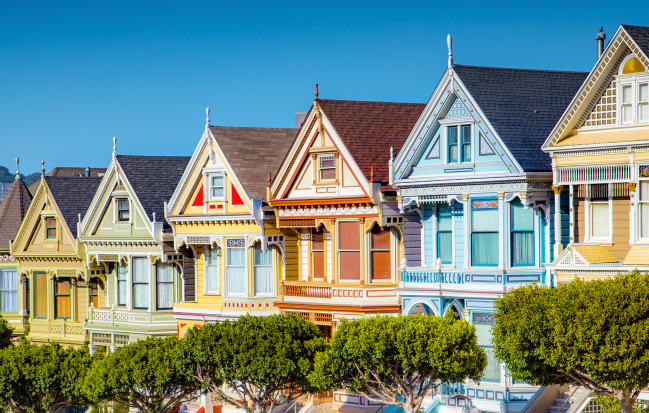 Last week, a San Francisco artist tweeted that the right people could apply to have their homes verified:

You can now get a Verified Badge crest on your Bay Area home if you're an influencer, public figure, or represent a brand. https://t.co/SyoURdSGe7 pic.twitter.com/H1Sz3gwBdL

Artists gotta rewrite their brains for the common internet scroller. I thought my second tweet in the thread was clear that Blue Check Houses was a response to a simple joke on a previous tweet. Alas! I now have a disclaimer. pic.twitter.com/thAjmdLwsq

But Danielle Baskin, the SF-based artist behind the prank, had no idea the website she crafted to back up the fake service would receive 495 applicants, all hoping for a crest of their own.

“But everyone else thought the website was real. I did what I thought was a mediocre Photoshop job … I thought, ‘This is all very clickbait-y.’ All of the copy, I thought, was so obviously satire.”

At this point, you know what’s more annoying than people falling for dumb pranks or fake news on the internet? People who are surprised that people are still falling for dumb pranks/fake news on the internet. People are stupid. We know this now. Look at pizzagate. Look at Fyre Festival. We need to be gentler with morons. You shouldn’t condemn the moments where the sheep are conned into making bad decisions based off false theories, only to continue herding them away from truth through your own “satire.” I hate to say it, because satire is the spice of life. But by now, we have to know that there are WAY too many people out there who possess ZERO ability to sniff the difference between truth and bologna.

Here’s another example: a few days ago, I tweeted the following story on my Instagram…

If you read that thread, it ends with me saying that I walked in on my girlfriend 96ing with a reformed homeless man named Sal. Who, by the way, had just murdered someone.

Any guesses as to how many DMs I got asking if it was real? Any idea how many TEXTS my girlfriend got from HER friends, wondering if we were still together?!?!?

Hundreds! I received HUNDREDS of DMs from people who thought that I was actually announcing my return to bachelorhood via a series of tweets. About the homeless, former Jamba Juice employee I saved, who then stole my girlfriend from me.

You bet people will think it’s possible to get their San Francisco home verified. That seems logical, even.

Just because people are stupid doesn’t mean we need to come up with quirky, anthropological experiments to illustrate their stupidity for our own amusement. Let’s let them be, for a little while.

Eh. Who am I kidding. I love it when the stupids show their colors. Let the world burn.