Sarah Cooper, TikTok Trump Impersonator, Is Getting A Netflix Special 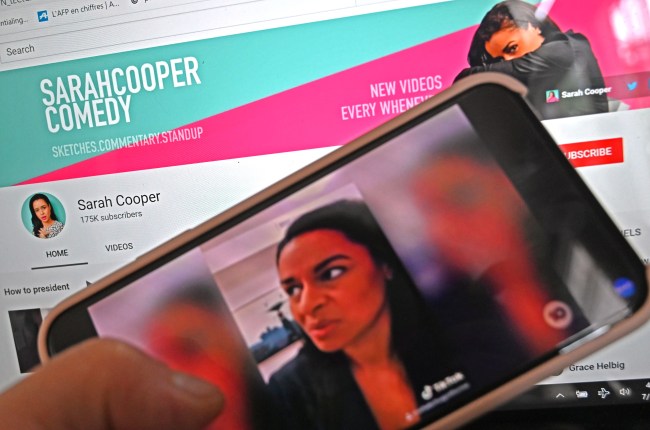 Comedian @sarahcpr is getting her first comedy special thanks to @Netflix.

Here's what we know about it so far: https://t.co/RDuib1oAHz

Sarah Cooper is one of two comedians who used quarantine as a time to surge forward. Andrew Schultz is the other. Comedy clubs closed? No problem, let’s take our talents to social media and BLOW UP. Granted, Cooper had published a few books already and was definitely on the radar (and Schulz was definitely soaring before March) but they both hit a different gear thanks to their harnessing of social media. Cooper started doing these Trump lip-sync impersonations—throwing her own hand gestures, facial expressions, and movements into the recitation to make them all her own. In case you’ve been living under a despotic regime that censors all media, here you go:

I love her. She took an extremely simple concept and made it fun to watch, with an endless supply of material. She also makes this look easy and it isn’t at all. The creativity lies in her expressions, editing, and the personified inclusion of referenced characters in Trump’s sound bites. It should be accessible from both sides of the political aisle, but that’s probably naïve. I guess a better, more realistic way to put it is that hopefully, republicans and democratics would find this equally enraging.

I say all this because I recognize that some people are NOT fans of hers. Whatever, fine. To each his/her own. But personally, I’m pumped she got a Netflix special. Sounds like it won’t be a typical standup hour.

LA Times– “Sarah Cooper: Everything’s Fine” is being billed by the streaming platform as a “variety special full of vignettes dealing with issues of politics, race, gender, class, and other light subjects.” The special, which will also feature special guest interviews, sketches and more, will premiere globally this fall.

I’m encouraged by Netflix’s willingness to take shots on people who don’t fit the typical standup special mold. John Mulaney’s variety special John Mulaney and the Sack Lunch Bunch was a new and unique take on the special. And sure, HBO has featured some offbeat specials over the years. But it’s awesome to see the biggest streaming platforms develop content around creators who put themselves on the map using their instagrams, tiktoks, twitters, etc.

Good luck to Sarah Cooper! Looking forward to the special.