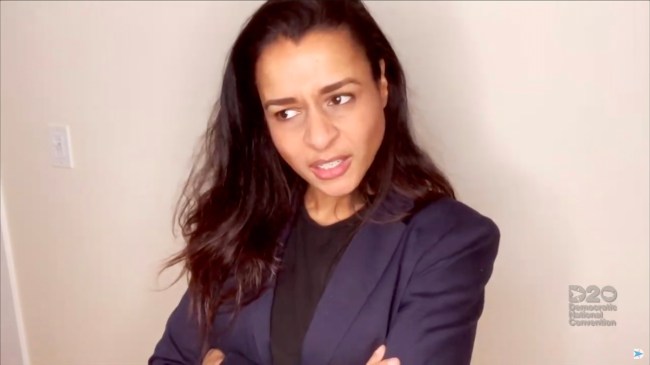 At this point, I assume we’re all familiar with comedian Sarah Cooper. She’s been absolutely crushing these viral Trump lip-sync impressions, and her career has exploded.

In a recent interview with the NY Times, she said that she hopes that both she, and America, can move on from Trump tomorrow:

As the most powerful man in the country peddled hydroxychloroquine and disinfectant snake oil as cures for the coronavirus, the comedian Sarah Cooper scoured her kitchen cabinet for props, scouted her lockdown apartment for locations and angled her iPhone. The result: a series of lip-sync videos posted on TikTok and Twitter — and viewed by millions.

Ms. Cooper says, “My success is forever linked to this person that I absolutely hate.” But she hopes that after Nov. 3, she can put Trump behind her.

Now, comedians are a selfish, soulless bunch. Not many civic-minded philanthropists among the comedy community. It’s possible that Sarah Cooper is an exception to this, and that she means what she says. But in my experience, any comedian that tells you they would happily trade the popularity of their Trump material for life without Trump as President is either lying or unaware of how it feels to lose their Trump card (YEP! PUN INTENDED!).

I’m not saying that Sarah Cooper won’t be able to continue building her success with Trump out of office—she seems smart and talented and innovative, and I’m sure she’ll continue to grow regardless of the outcome tomorrow. But there are a LOT of comedians out there leaning into Trump material who, if Biden wins, will have a very hard time holding on to the spotlight with life after Trump. There will be a sober day of reckoning for many Trump impressionists as they watch their once-steadily rising instagram following reverse course and bleed away. Fans will lose interest and flock to whatever catches their fleeting attention next, whether it’s tousle-haired teens dancing on TikTok or dirty turtle puppet shows. I don’t know, I’m not a prophet. But I have experienced this first-hand.

I used to sing songs about Game of Thrones. I only started doing them during the final season, after the first week, and they picked up steam immediately. Once the show ended, it felt pathetic to continue doing them—like the kid who can’t stop attending high school parties even though the high school was demolished, and everyone hated the high school in its last year anyway. Move on, guy. The party is over.

There were plenty of Sundays where I didn’t have it in me to do the song. I was tired, hungover, hoarse… I didn’t care that much about the show, didn’t want to sit at the piano and yell-sing my predictions, disturbing the peace of a Sunday spent fending off anxiety through cup after cup of THC honey-infused chamomile tea.

On top of that, the show wasn’t exactly ending on a strong note. I was never a “SIGN THIS PETITION TO RE-SHOOT THE FINAL SEASON OF GAME OF THRONES!” guy, but clearly, season 8 wasn’t their strongest.

And finally, I didn’t really enjoy doing them. I didn’t find them funny myself, and I still don’t understand why this was the thing that people liked. I’d been throwing stuff at the wall for years as a comedian, hoping to find something that stuck. Sketches, blogs, standup jokes, tweets… you name it, I tried it, all dud fireworks that tailed off into the ether without a bang. As creators, I guess we don’t get to choose the work that takes off.

But even with all that, there isn’t a day that goes by where I don’t wish the show were still around for me to sing about. I was picking up tens of thousands of followers on Instagram every time I posted one of these things. Good Morning America ran a clip of one. My standup shows on the road were selling out with people demanding that I sing the GOT song at the end of the show, even though it didn’t make any sense in my act. To this day, I get DMs from people who know me more for those songs than for anything else I’ve done in my career.

Sarah, don’t bite the hand that feeds you. Ride that Trump wave as long as you can. Just as we don’t choose the people we fall in love with, we don’t choose the Instagram or TikTok posts that people share with their friends. At worst, you’ve got four more years to ride that wave. I would happily endure four more disappointing seasons of Game of Thrones just to recapture the high of my instagram exploding on Sundays.