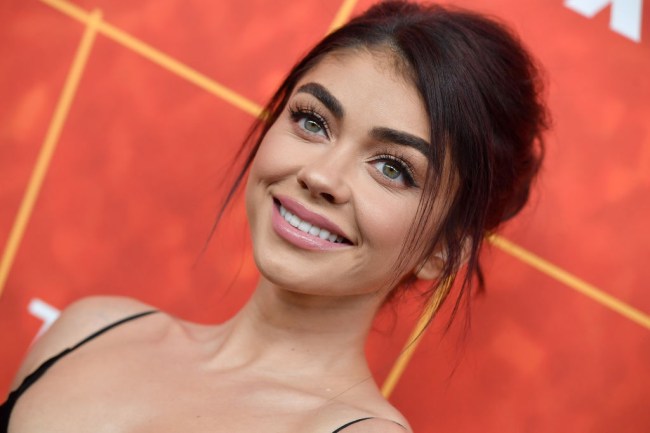 People make mistakes. People get bad tattoos. Thankfully, there are ways to remove bad tattoos, but tattoo removal can be painful. Sarah Hyland learned this fact the hard way as she removed a very regrettable tattoo removed from her butt.

Hyland and her best friend Katie Welch got matching tattoos on their derrieres. What is the tattoo you ask? A dinosaur. No, really. The cartoon-ish purple-colored dino looks like a cross between Yoshi and Barney the dinosaur. On September 3, 2017, Hyland and Katie Welch debuted their prehistoric matching tattoos on Instagram with the caption: “We believe in dinosaurs #dinobootybabies.”

Two years later, Hyland has regrets and is ready to make that adorable dinosaur extinct. Did Sarah no longer appreciates dinosaurs or did her fiancé Wells Adams did not appreciate a cartoon dinosaur smiling while doing it doggy style? Either way, Hyland got the dino tattoo removed, and it looked quite painful.

The Modern Family star went and saw Nurse Jamie, skincare doctor of the celebrities. The 28-year-old Hyland captioned the Instagram video: “Actual reaction to some laser tattoo removal.” During the procedure, she says, “Oof…that hurt. Spicy.”

Hyland has four other tattoos include a hummingbird under her ear, the words “follow my heartbeat” on her left ribcage inked, an arrow on her spine done by tattooist Max Hanson, and the Robert Frost quote “The best way out is always through” on her right ribcage that was inked by celebrity tattoo artist Dr. Woo.

In other Sarah Hyland news, the actress and her future husband are getting berated by wokescolds online for an Instagram photo. The couple attended a wedding last weekend that had a photo booth. Hyland and Wells were joined by two other couples, and they took a photo. In the pic, Well grabbed Hyland’s breast, which set off a few very miserable people.

“In times of gender balance and women’s rights and respect, we still see pics like this… we are not moving forward with such mentalities,” one person wrote in the Instagram comments of the photo according to Entertainment Tonight.

This is why we can’t have nice things.