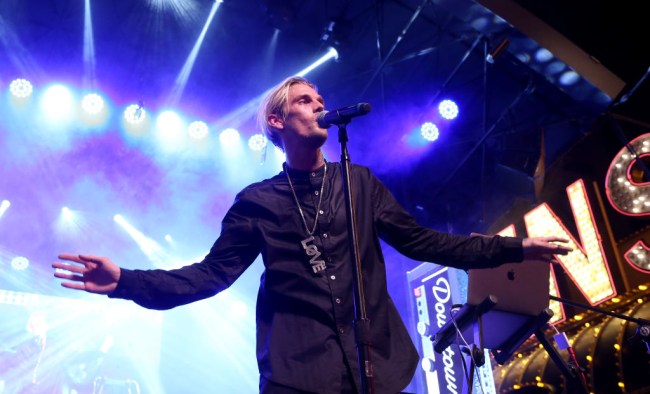 The life of Aaron Carter takes many twists and turns. In today’s Aaron Carter news, the I Want Candy singer unveiled his new neck tattoo, his own mother said he’s “no Justin Bieber, and revealed he has a 12-year-old son with a former beauty pageant queen. Just a regular day for AC.

On Tuesday, Carter revealed he purchased an 8-bedroom, 9,000-square-foot mansion in Nova Scotia and moved to Canada after calling America “foul.” All that space in his new crib might come in handy because Aaron allegedly has a 12-year-old son.

The That’s How I Beat Shaq singer revealed that he has a 12-year-old son. “Did you know I have a 12-year-old son? Bet you didn’t know that,” Carter said on Instagram. “That’s because you know nothing about me. How would you? You guys seem to know everything… You should know!”

Carter said he impregnated former pageant queen Hayley Eisenhardt and she allegedly had not allowed him to see his 12-year-old son.

“Ask Hayley Eisenhardt. She’s never let me meet him. Where is my son? Hayley I think you should respond now. Miss teen Michigan… I would like to meet my son,” Carter wrote on Twitter.

Ask Hayley eisenhardt she’s never let me meet him. Where is my son? Hayley I think you should respond now. Miss teen Michigan… I would like to meet my son. https://t.co/gPSdrMdBkE

The Aaron’s Party singer also revealed his new neck tattoo. Following his large Medusa tattoo inspired by a 2013 Rihanna GQ photoshoot, Carter balanced his face with another neck tattoo on the other side of his head.

Carter’s brand new ink on his neck was still bandaged up.

Tattoo artist Herchell Carrasco had to talk Carter out of getting fresh ink all over his face. “[Carter] wanted to keep going and I had to stop him,” Carrasco said. “I couldn’t cover his whole face in a tattoo. I just couldn’t.”

The Bad 2 Good singer announced that his mother, Jane, is “almost 40 days sober and she is truly the love of my life.”

Aaron and his mom are appearing in WE tv’s upcoming season of Marriage Boot Camp: Family Edition. The 31-year-old was complaining about how he was robbed of his youth because he was touring all of the time. That’s when mama Carter dropped some truth on Aaron: “I don’t think it was that much… you weren’t a Justin Bieber.” Ouch.