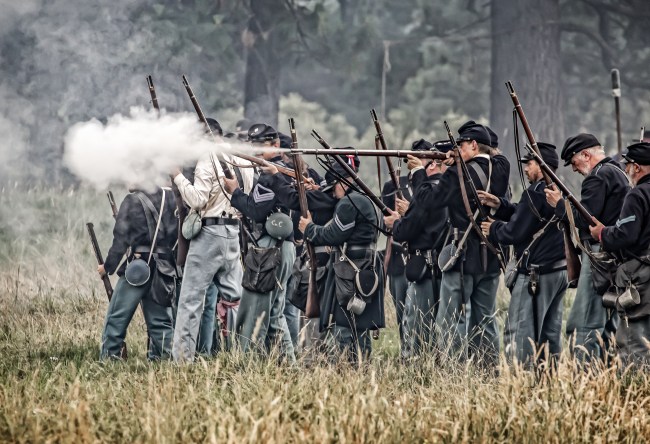 As far as sensitivity goes, I’d say wars have pretty thick skin. Not too many passive-aggressive twitter beefs going down between @francoprussian1870 and @falklandsforthewin. Sure, there may be some gentle jealousy towards WWII, the Crusades, and some of the other blue checkmark holders, but it’s layered with respect. I mean, if not for the biggies, Wikipedia would still be asking for donations! Right?

Throw “Civil War” into your Twitter search right now. Hundreds of mentions about how we’re about to start round two tomorrow. Also a LOT of versions of “what should I wear to the civil war tomorrow?” and “before we start civil war, anyone wanna admit they have a crush on me?”

A lot of people thought those same jokes. A lot.

what y'all wearing for the civil war tomorrow?

Just getting my steps in before the civil war

Now, I know plenty of these kids are joking around. But there are plenty of people who are talking about a legitimate civil war breaking out once the election is called. “Make sure you stock your freezer in case we have another civil war.” That’s real advice I heard from a family member whom I won’t name because he/she is respected. Oh, right, because smoothie ingredients will help fortify my no-doorman, ground-floor apartment in Manhattan. Those mango chunks are just as effective as sandbags.

Here’s the thing: THE Civil War? It was NUTS. Absolutely insane! Go back and watch Lincoln. The opening scene of the battle at Jenkins Ferry, where it’s raining and the union soldiers are smushing the confederates heads into the mud and drowning them? It’s only about a minute, but I’ll never forget it. Just a 10,000 vs. 12,000 fist fight. Think of an NFL fight where things get “out of control” and are “bad for game.” Now, imagine if everyone sitting in decent seats joined in. Everyone below the balcony. That would make Sportscenter.

The Civil War! 1861-1865. Do you have any idea how painful it is to have your leg amputated at the knee with only a wooden soup ladle between your molars for pain? It’s worse than being maced by a part-time Geometry tutor in Portland, Oregon, I can promise you. “MILK! I NEED MILK FOR MY EYES.” Well, in 1862, the city of New Orleans needed milk because they were starving to death. We’re not in the same ballpark, guys.

And so, get out there and cast your vote. Watch your election trackers. Go to bed annoyed that maybe 60% of the states haven’t called it yet. And know that tomorrow, and the next day, and the next day, we’re probably not starting “another” civil war.

At least, unless Texas decides to go it alone again. And convinces a few others to come along. In which case, don’t forget your frozen mango chunks.